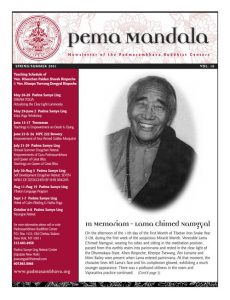 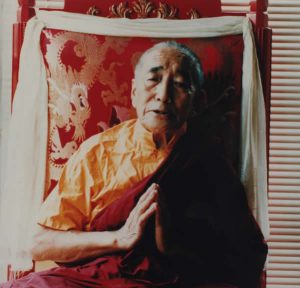 In Memoriam – Lama Chimed Namgyal On the afternoon of the 11th day of the First Month of Tibetan Iron Snake Year 2128, during the first week of the auspicious Miracle Month, Venerable Lama Chimed Namgyal, wearing his robes and sitting in the meditation position, passed from this earthly realm into parinirvana and rested in the clear light of the Dharmakaya State. Khen Rinpoche, Khenpo Tsewang, Ani Lorraine and Mimi Bailey were present when Lama entered parinirvana. At that moment, the character lines left Lama’s face and his complexion glowed, exhibiting a much younger appearance. There was a profound stillness in the room and Vajrasattva practice continued. Over the next three days, until it was necessary to move Lama to the crematory, his body was not touched and one of the PBC members who entered his room to sit with him, some 24 hours after his passing, reported that if she had not known that Lama had passed, she would have thought he was meditating – just as we had observed many times over the years that he lived at Mandarava House.

When Lama was moved to the crematory on the third day, his skin was tender, smooth and youthful and his body was as flexible as a living person. Following Lama’s cremation, the Khenpos found relics among his remains. As stated in the Tantra by Buddha Shakyamuni and Guru Padmasambhava, these signs are indications that a highly realized being has passed to the Dharmakaya State.

“In this world, at this time,
there are many people
who are suffering.
May I become the substitute
for their illness.
May the six realms be free
from suffering and
the cause of suffering.”

Although Lama Chimed had been in failing health for a year, to the amazement of his doctors, he had tolerated radiation and chemotherapy without the usual side effects. He continued practicing, meditating, doing prostrations – and doing push ups at Dreher Park – until the end of his life. Lama’s love and compassion was felt by all who visited him and, as a true Bodhisattva, his love and compassion was evident when he said the following words three days before his passing: “In this world, at this time, there are many people who are suffering. May I become the substitute for their illness. May the six realms be free from suffering and the cause of suffering.” 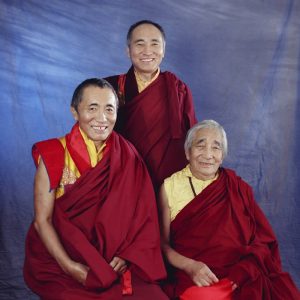 As is the custom when a realized master passes, 49 days of special practices and pujas followed Lama’s passing, using Peaceful and Wrathful Buddha Sadhanas and the Buddha Amitabha Sadhana. Special practices were held at the Palm Beach Dharma Center following Lama’s cremation. Several memorial tributes were given in Lama’s honor and they are being transcribed so that they can be published in the Fall Issue of Pema Mandala.

The Miracle Stupa that is being constructed in Sravasti, India will be dedicated, in part, to Lama Chimed Namgyal and his relics will be enshrined there. Since Lama’s passing, more than $10,000 has been donated to this project in his honor. Additional donations can be sent to: Padmasambhava Buddhist Center, P.O. Box 1533, Old Chelsea Station, NY 10011. 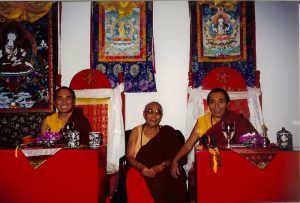 The Khenpos express their deep gratitude to all who participated in the special practices for Lama before and during the 49 days after his passing and to those who honored Lama by contributing to the Sravasti Stupa Project that was so close to Lama Chimed’s heart.

Lama Chimed was a wonderful father to the Khenpos and served as a role model and inspiration to them. Lama exemplified devotion to the Dharma, courage, commitment, love and compassion to his sons and to all who had the privilege to be in his presence during his lifetime and at the time of his passing. We are grateful to Lama Chimed for his wisdom in taking his family to India in the 1950s when he recognized that Guru Padmasambhava’s prediction of difficult times for Tibet was coming true. His wisdom ultimately brought us three teachers, Khen Rinpoche and Khenpo Tsewang in the early 80s and himself in 1989. How blessed we are and have been! 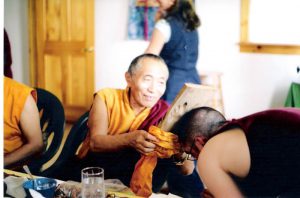 I will miss seeing Lama Chimed again this lifetime, but when I – and others – least expect it, Lama’s presence is manifested in some beautiful way and we know that he will be with us, guiding us by his example until we have reached enlightenment – no matter how many lifetimes it takes. Then, at the moment that we reach the dharmakaya state, we will be greeted in Dewachen by Buddha Amitabha with Lama Chimed by his side. And, Lama will be laughing and shaking his head and saying, “I don’t know.”

Images of the Ven. Khenpo Rinpoches