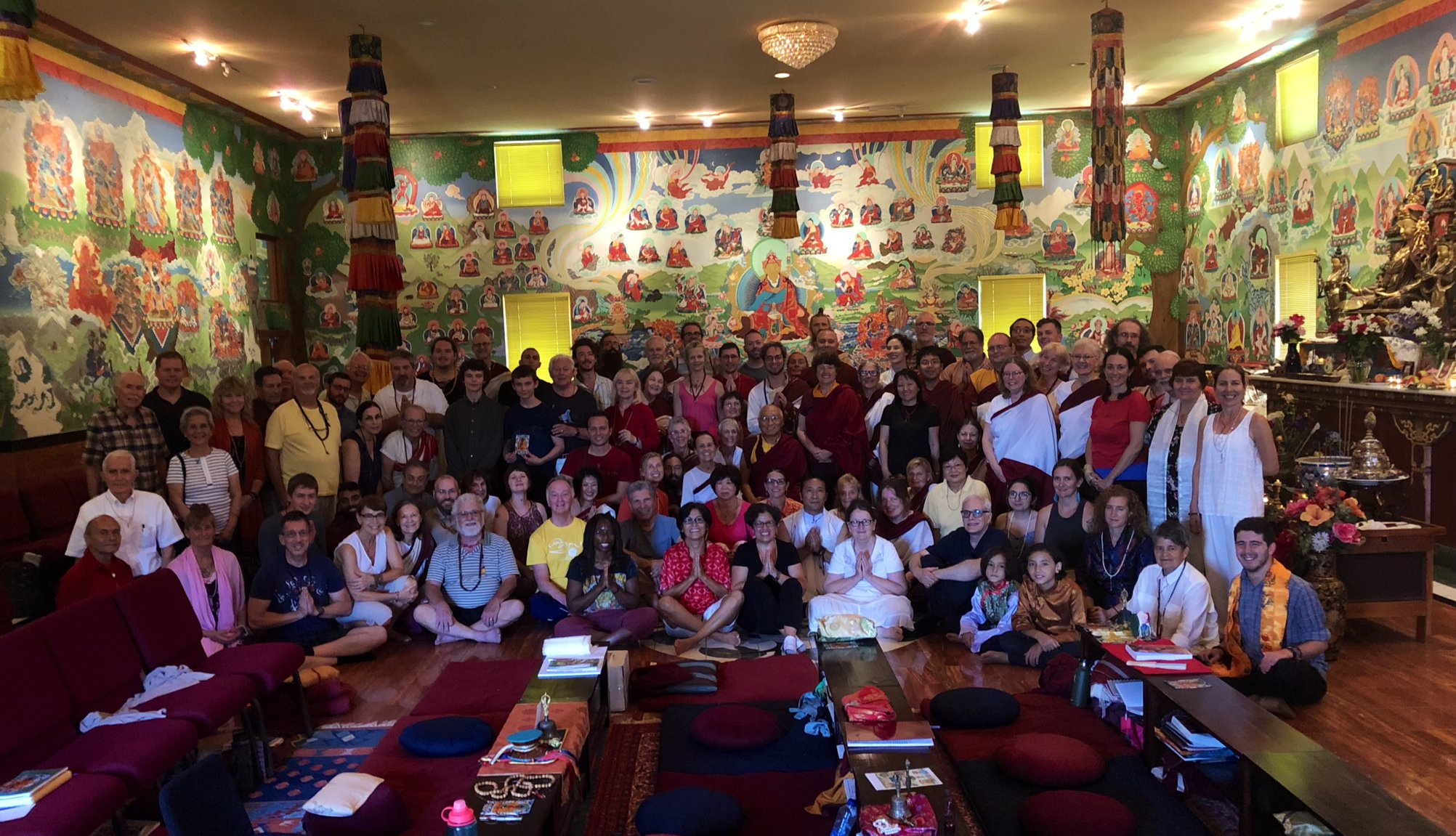 Empowerment and Teachings on Hayagriva and Vajravarahi

According to the Lineage of the Great Terton Tsasum Lingpa

The gracious teacher Buddha gave a variety of teachings based on the readiness of practitioners. These teachings are completely based on non-violence, peace, harmony, and respect for all beings, and help us to discover our ultimate goal of peace and happiness. Buddhism became very popular all over Asia, including in Tibet, particularly for King Trisong Deutsen and his ministers. Because of his courage, commitment, and willingness, Buddhism was brought to Tibet in the 8th century by the great master Shantarakshita and Guru Padmasambhava. Since then until now, Buddhism has been the focal point of Tibetan life. So many dedicated practitioners achieved the highest state of realization that we can discover through spiritual practice.

Guru Padmasambhava gave numerous esoteric teachings, such as the Inner Tantras, which includes practices on the Eight Herukas. Among them, meditating on the Padma family was one of the very important heart practices of Guru Padmasambhava, so he gave many teachings on the peaceful and wrathful deities of the Padma family. Many of these instructions were hidden with ritual objects throughout Tibet with the assistance of the wisdom dakini Yeshe Tsogyal. Beginning in the 11th century, numerous great treasure discoverers, or tertons, appeared to reveal and spread these termas, which has continued through the present.

This summer, Ven. Khenpo Tsewang Dongyal Rinpoche will bestow one of the great teachings of the Padma family on the supreme herukas Hayagriva and Vajravarahi according to the terma of the great terton Tsasum Lingpa. Ven. Khenpo Tsewang Dongyal Rinpoche will explain the structure of all sadhana practices of the Inner Tantras, including the Creation and Completion Stages of visualization, mantra recitation, and Dzogchen. He will give very detailed and thorough instructions so practitioners can absorb the heart of the Vajrayana teachings, and not just receive empowerments and blessings.

Tsasum Lingpa was one of the renowned emanations of Nubchen Sangye Yeshe and is one of the leading of examples of a terton who discovered termas from the earth, rocky mountains, and lakes. He discovered so many essence teachings of the Inner Tantras, including Mahayoga, Anuyoga, and Atiyoga, as well as practices on a variety of deities of the Inner Tantras. In particular, he discovered this Hayagriva and Vajravarahi teaching in the Fire Monkey Year (1716) from the very holy mountain in southern Tibet known as glorious Tsari Ta, which is considered one of the 24 holiest places on earth according to the Inner Tantras.

In Tsari Ta Mountain, Guru Padmasambhava and Yeshe Tsogyal hid many termas to be discovered in the future, and exactly according to the predictions of Guru Rinpoche, many tertons revealed termas there. Many Nyingma and Kagyu masters also meditated and actualized the highest realization of enlightenment at Tsari Ta.

This Hayagriva and Vajravarahi practice is strongly connected to the Padma Heruka family and is the essence of Mahayoga, Anuyoga, and Dzogchen. The combination of these two buddhas is a very powerful practice for this time to discover our innate nature and remove physical and mental obstacles. In particular, this practice will increase life force and bring the realization of the pure view of the cosmic mandala and its inhabitants.

Retreat begins Saturday, July 13, with morning practice at 7:00am, breakfast and registration 8-10am; and first teaching at 10am.

In order to facilitate planning and preparations, pre-registration is requested for all events at Padma Samye Ling.