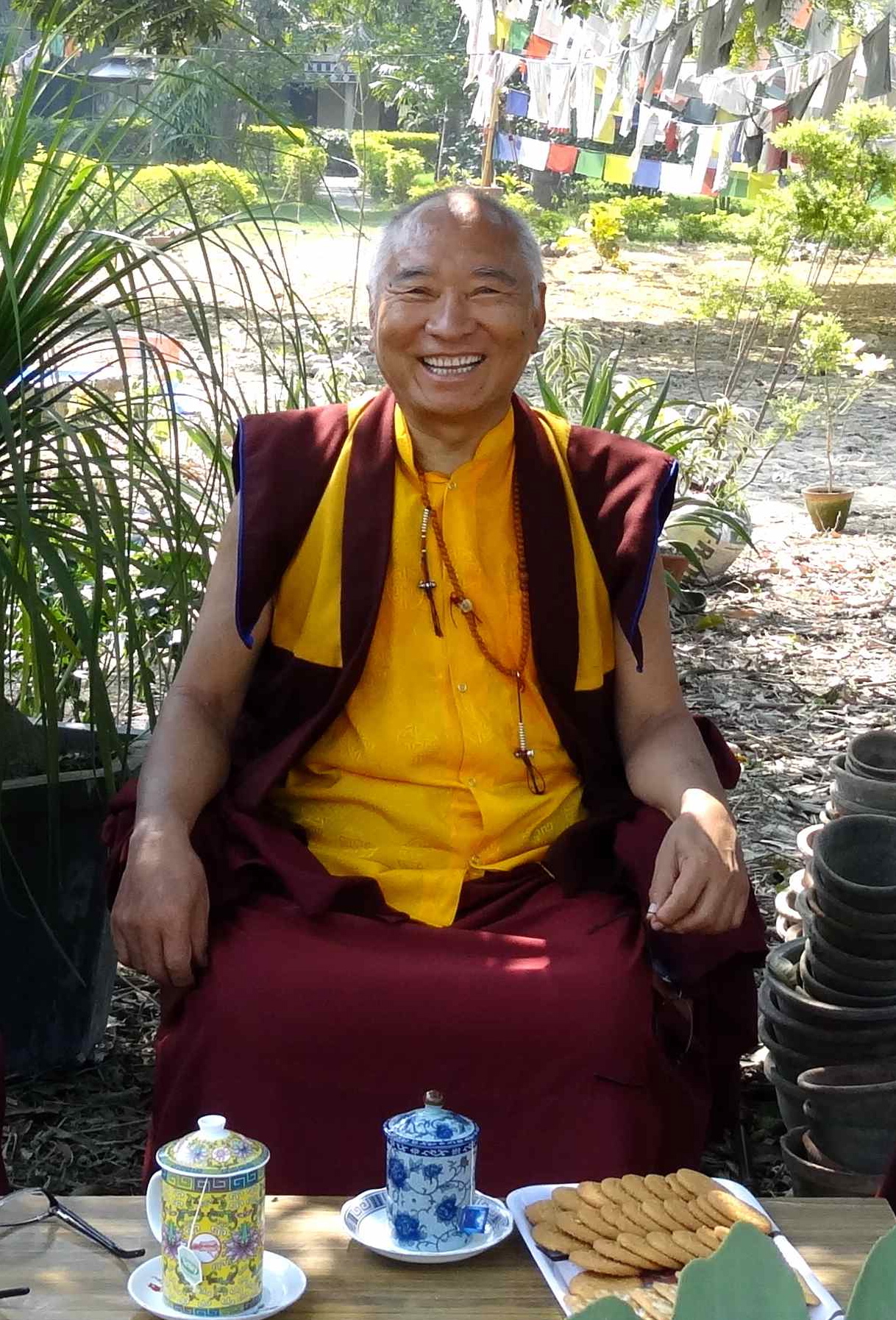 “In Vajrayana, there are two good motivations that are extremely important that we should always try to have: (1) the vastness motivation of bodhichitta and (2) the purity motivation of the Vajrayana. The opposite of these motivations are hindrances and obstacles to our practice, so we should avoid them.
We can activate and glorify the beautiful, vastness motivation of bodhichitta by thinking of all living beings. Bodhichitta is wisdom and compassion. When we unite and illuminate these together in our heart, everything becomes quite good and beautiful. This is the best way to develop our purity understanding of the true nature, which Vajrayana teachings often mention. We should see everything as beautiful and perfect. When we have love, compassion, and wisdom in our hearts, the glory of the Vajrayana naturally arises. This motivation is always important—not just for you or me, but for everyone who practices the Vajrayana.
The second motivation is the purity understanding of the true nature, which means that everything is naturally pure and beautiful. In Vajrayana, we don’t stay in the world of duality. Instead, we instantly leap over to the purity state of the true nature as it is, without being blocked by duality. Courageously and skillfully we lift ourselves up and out of the mundane samsara view. This doesn’t mean we’re trying to cover anything up by just saying it’s beautiful. When we’re not caught in the grasping of duality mind, we’re in the authentic nature of our mind. If we stay in the true nature for even one instant, it reveals the beautiful nature of everything.
In reality, everything is in this beautiful, natural state. But to realize this purity, we have to connect to our heart and the nature of our mind. If we abide in nondual awareness, we’ll begin to see that everything is already pure, divine, and enlightened. This is how we begin.
These two motivations are very important. The teachings always mention them, and we’ve heard about them so many times from Khenchen Rinpoche. Every time he taught, he always highlighted these motivations. Not only him, but also whenever we read or receive teachings from other great masters, such as His Holiness Dudjom Rinpoche, they always highlight these motivations because they are the essence of our practice. They are our ground and foundation—the platform we’re standing on. With this base, we can begin to develop everything mentioned in the Vajrayana. But without this firm foundation, our practice won’t go very far. That’s what the teachings say and that’s really how it is. In a way, these two motivations are very basic, but they’re so important and we must be firmly rooted in them.”
Ven. Khenpo Tsewang Dongyal Rinpoche
The Essential Journey of Life and Death, Vol. 1:
Chapter 18 (pgs 227-228)
Photo of Ven. Khenpo Tsewang Dongyal Rinpoche at PBC Orgyen Samye Chokhor Ling Nunnery in 2013.
END_OF_DOCUMENT_TOKEN_TO_BE_REPLACED 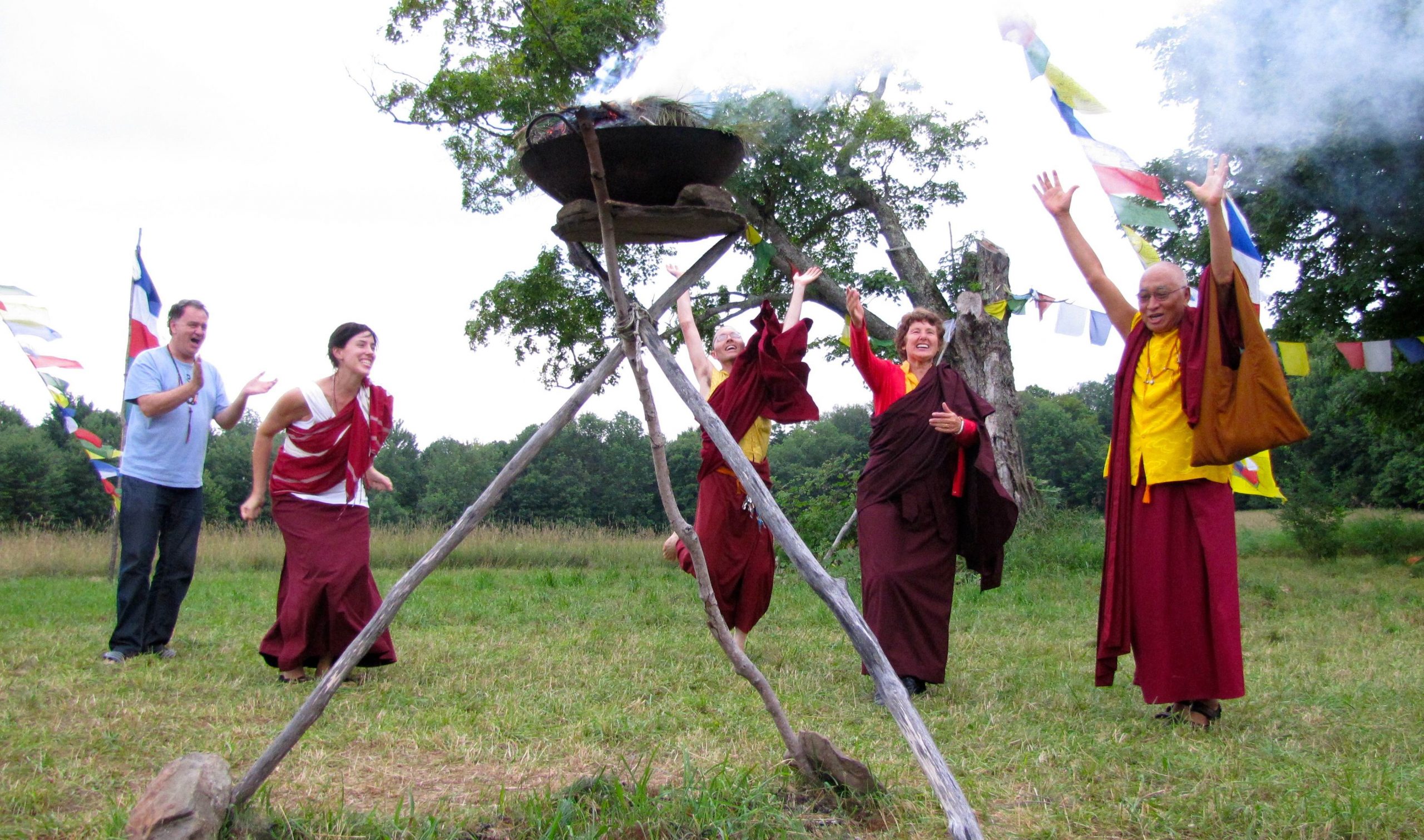 “Like athletes who train for the Olympics to win a gold medal, the bardo of birth and life is the training ground to exercise and actualize our skills so that the other bardos—particularly the fourth, fifth and sixth bardos of dying, after death, and becoming—provide the conditions to acquire a gold, silver, or bronze medal. The first bardo is the best place to develop these valuable skills.
It is very special and precious to be human, to be surrounded by all this wealth and beauty, and to have the opportunity to realize buddhahood. This is a very crucial time. Don’t take this for granted and waste it. Actualize your true nature. The human realm is a unique place where we can work to accomplish something meaningful and develop our understanding. Buddha Shakyamuni reiterated this many times throughout his life. As we can see by observing what goes on in the world, this is not a pure land, but it’s the best place for us to learn and develop ourselves.
There are many other worlds—some are exceptionally beautiful, luxurious, and comfortable. In comparison, ours might not look that wonderful, but it’s actually a very special place. Here we can mature ourselves and transcend our limitations. There is a lot here that challenges us to grow, helping us to discover and express our buddha-nature. Qualities such as courage, confidence, and love are called forth in response to many situations. If we accomplish something meaningful here, we will also be able to go other places and enjoy higher realizations. But for now, this is the place where we must do something significant with our lives.
By practicing during the bardo of birth and life, great meditators can become enlightened within one lifetime. Yogis and yoginis with high realization are able to perceive the entire universe as the mandala of the deities, so that every form is seen as a buddha’s body and environment, all sounds are perceived as the pure speech or mantra of enlightened beings, and every thought and emotion is experienced as the wisdom mind of the buddhas. Recognizing the true nature of this continually unfolding vision is part of the spontaneous activity of pristine cognition. Ultimately, everything appears as a display of primordial wisdom, and within that realization, we can begin to help all sentient beings.
As Guru Padmasambhava said:
It is not the time to continue fooling around.”
Venerable Khenpo Rinpoches
The Essential Journey of Life and Death, Vol. 1 (pgs 100-101)
Photo of Ven. Khenpo Tsewang Dongyal Rinpoche celebrating with Sangha after concluding a fire puja ceremony in the meadow during the 2013 PSL Summer Retreat on the Dudjom Tersar Khandro Thugtik.
END_OF_DOCUMENT_TOKEN_TO_BE_REPLACED 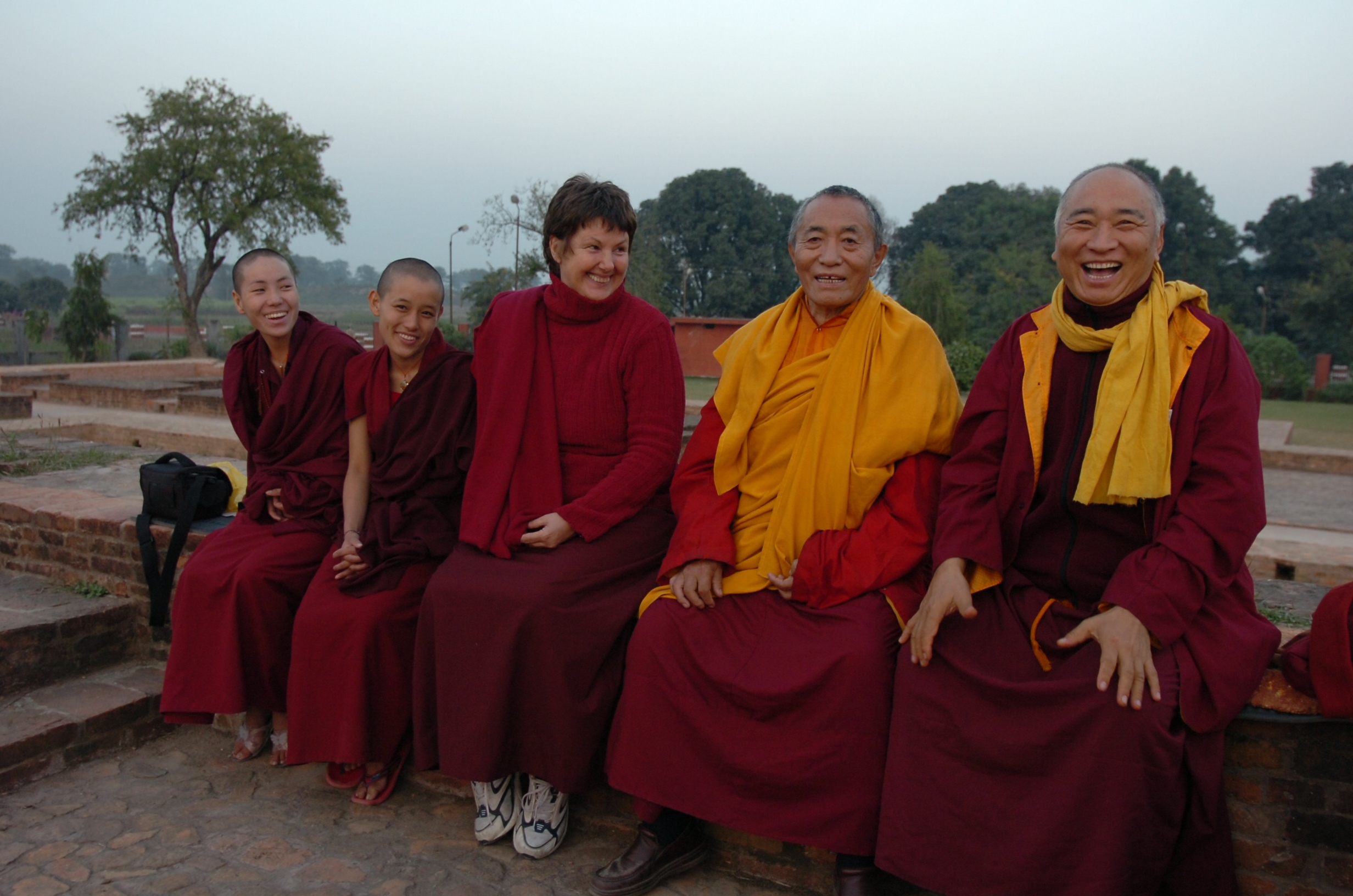 “Be patient and kind, attune yourself to the needs of others, and say and do only what gives them peace and inspiration.”
Venerable Khenpo Tsewang Rinpoche
Inborn Realization: A Commentary on His Holiness Dudjom Rinpoche’s Mountain Retreat Instructions (pg 168)
Photo of the Venerable Khenpo Rinpoches with Lama Jomo Lorraine in India in 2007, by Djamilla.
END_OF_DOCUMENT_TOKEN_TO_BE_REPLACED 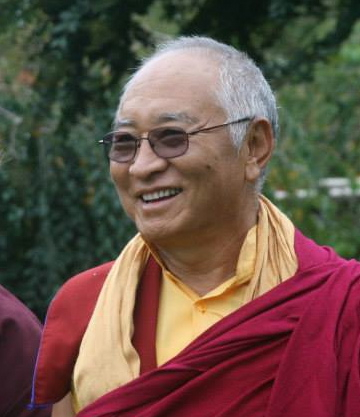 Don’t Be Too Attached to Worldly Things: Understand Suffering and Its Cause

Don’t Be Too Attached to Worldly Things: Understand Suffering and Its Cause
by Ven. Khenpo Tsewang Dongyal Rinpoche

END_OF_DOCUMENT_TOKEN_TO_BE_REPLACED 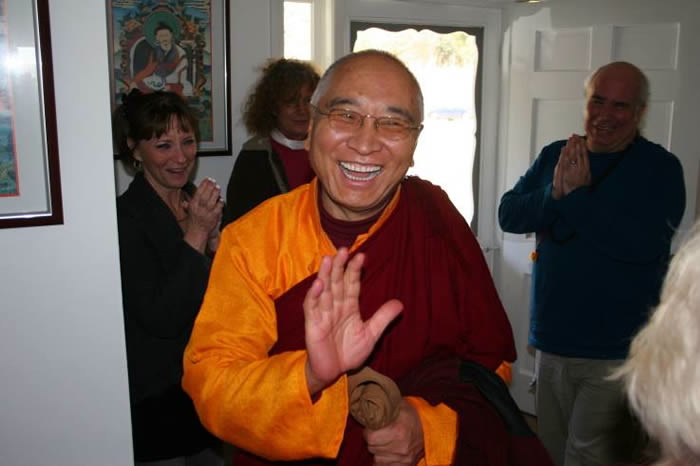 Auspicious Prayers in Tibetan
The Venerable Khenpo Rinpoches recite auspicious prayers in Tibetan for world peace and the well-being and enlightenment of all beings. This happened at the conclusion of Saga Dawa Duchen events on June 7, 2009 in New York City, which included a Vajrakilaya empowerment according to the lineage of Tsasum Lingpa, as well as teachings and meditation practice on the Buddha sadhana by the glorious Mipham Rinpoche.
END_OF_DOCUMENT_TOKEN_TO_BE_REPLACED 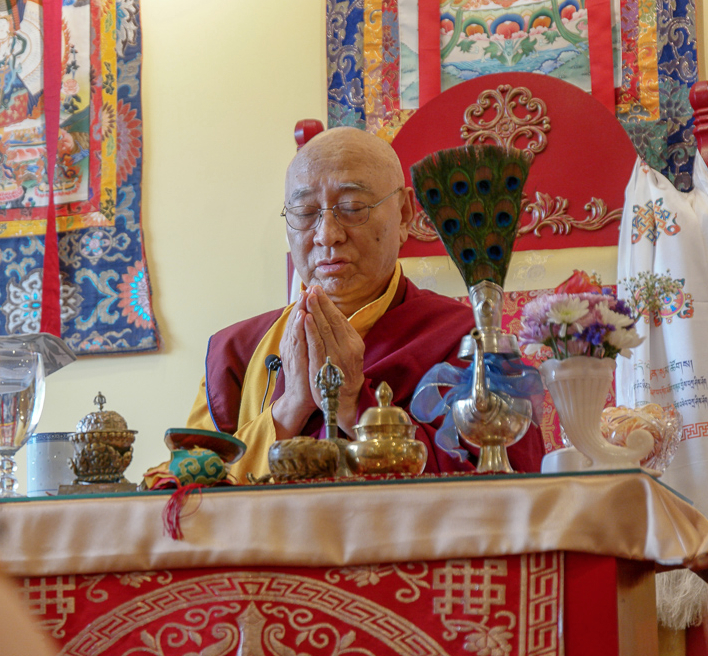 “By generating bodhichitta and reflecting on impermanence, we are naturally led to refuge. Refuge means we feel close to the Buddha, Dharma, and Sangha, and to Guru Padmasambhava and the lineage masters. Refuge also means that we’re connecting to the true nature of our minds. This is precious and wonderful, and we have every reason to rejoice at our good fortune. At the same time, we should honor the laws of karma by keeping our conduct in accordance with Dharma, and by flowing along with the interdependent coordination system. This also means that we do not disregard the customs and values of our society, but are mindful and adhere to them. When we respect the laws of karma in these ways, the result is harmony and peace.”

END_OF_DOCUMENT_TOKEN_TO_BE_REPLACED 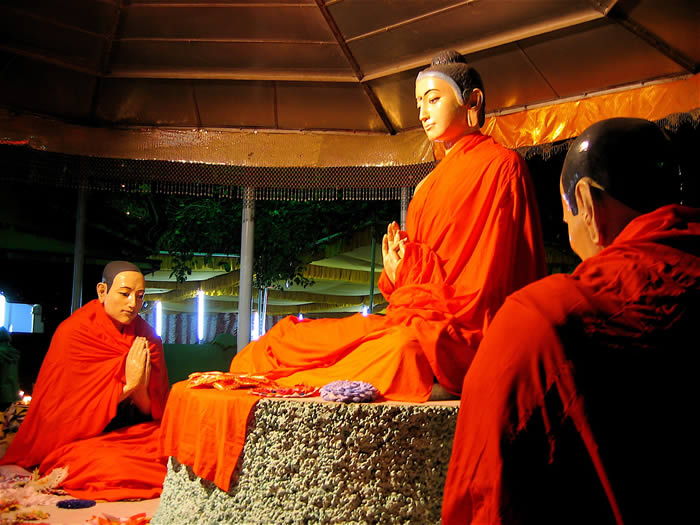 In this way, Rangtong and Shentong merge in the Nyingma school without contradiction. On the one hand, Nyingmapas recognize the truth of the Rangtong view, which explains the absolute nature as emptiness. Hence they perceive the second turning of the wheel of Dharma—the Prajnaparamita teachings that clarify the nature of emptiness—as definitive. On the other hand, Nyingmapas also see the third turning of the wheel of Dharma as definitive because it expounds tathagatagarbha and the five wisdoms, four kayas, ten powers, and four fearless states of enlightenment, otherwise known as the clarity aspect of the nature. So clarity and emptiness are both the nature of mind, of tathagatagarbha. This was pointed out and accepted by Mipham Rinpoche as well as the great master Longchenpa. In his Tegsum Dzo, or Treasure of the Different Doctrines, Longchenpa explains that the clarity and emptiness aspects of the nature are equally natural.”

Photo of Buddha Shakyamuni teaching his first five disciples in Deer Park in Sarnath, India, photographed at the Mahabodhi Temple in 2008.

END_OF_DOCUMENT_TOKEN_TO_BE_REPLACED 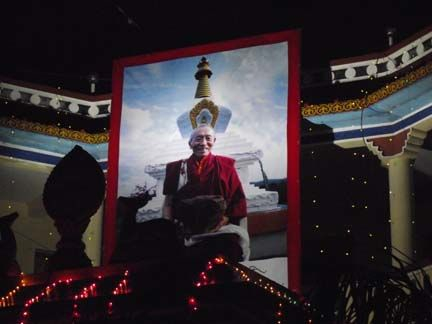 The Four Types of Devotion 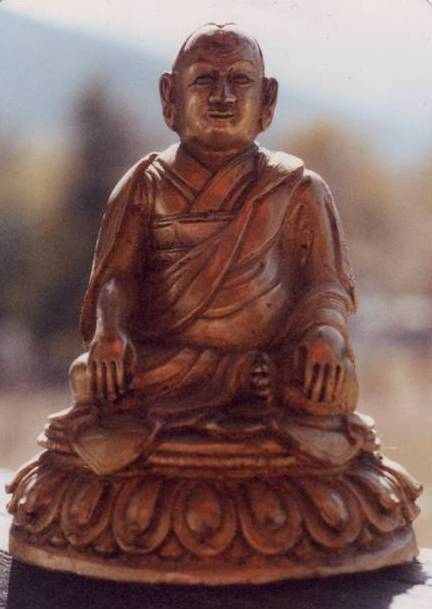 “So stay right here, you lucky people,
let go and be happy in the natural state.

Let your complicated life and everyday confusion alone
and out of quietude, doing nothing, watch the nature of mind.

This piece of advice is from the bottom of my heart:
fully engage in contemplation and understanding is born;
cherish non-attachment and delusion dissolves;
and forming no agenda at all reality dawns.

Whatever occurs, whatever it may be, that itself is the key, and without stopping it or nourishing it, in an even flow, freely resting, surrendering to ultimate contemplation, in naked pristine purity we reach consummation.”

END_OF_DOCUMENT_TOKEN_TO_BE_REPLACED 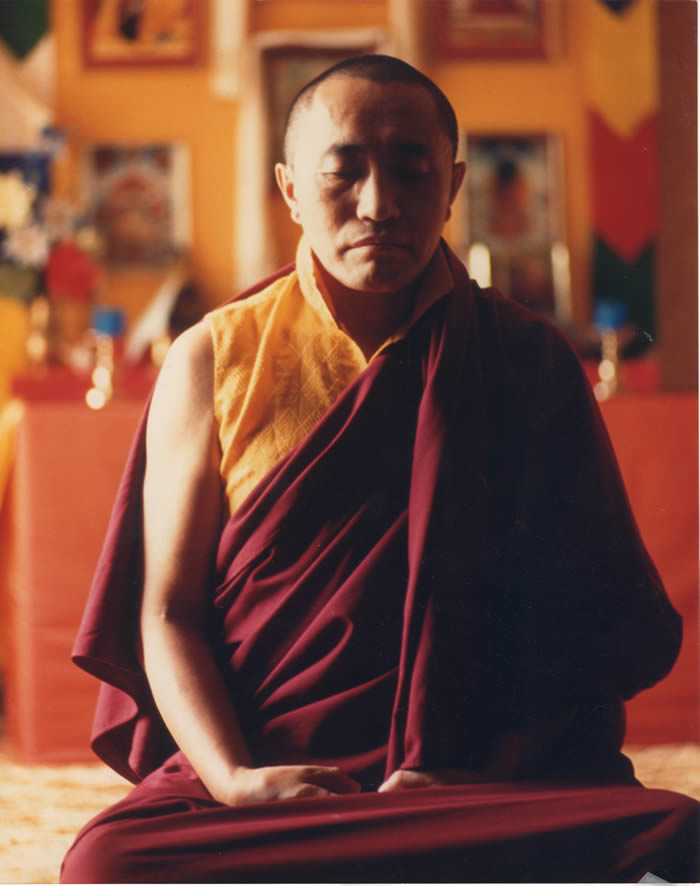 The Three Things We Should Not Concern Ourselves With

“Ancient masters said that there are three things we should not concern ourselves with: food, clothing, and voice. While it is easy to understand not being too concerned with good food and clothing, why did they include “voice?” Voice means always wanting someone to say good things about you. If we have that much expectation, when someone says something bad about us, we get upset and angry. We are still bound up in hope and fear, and that is why the ancient masters said good Dharma practitioners don’t care much about these three things. We should immediately drop them, throwing them to the wind, letting them go wherever the wind takes them. When we are free of them, we don’t have so much hope and fear, and we can relax and be centered in our true nature of joy, peace, and happiness. This is how we subdue the first gangster of greed.”
Venerable Khenpo Rinpoches
Supreme Wisdom: Commentary on Yeshe Lama (pg 289)
Photo of Ven. Khenchen Palden Sherab Rinpoche meditating in the 1990s.
END_OF_DOCUMENT_TOKEN_TO_BE_REPLACED
1 … 64 65 66 67 68 … 74