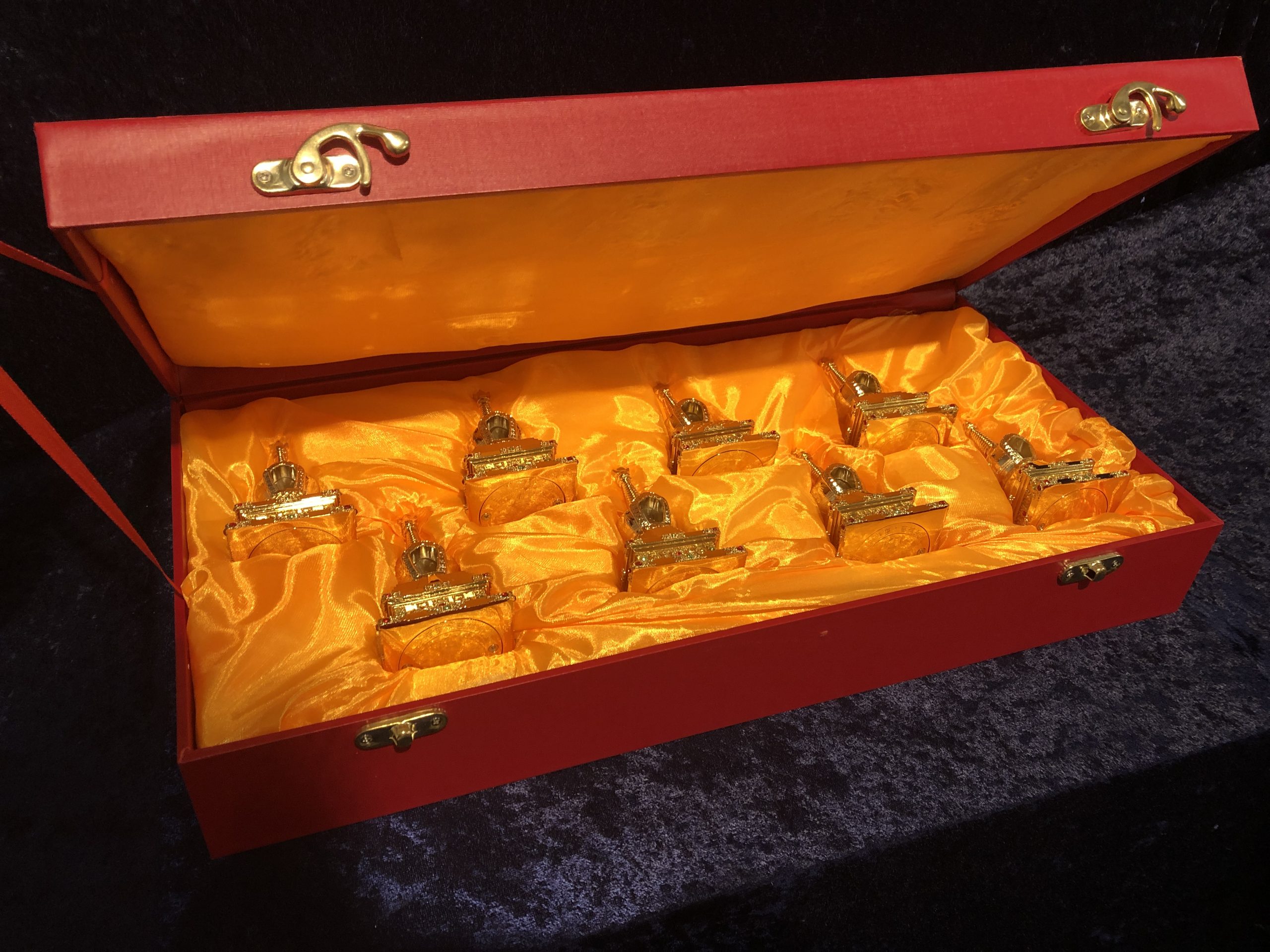 Celebrating the 30th year Anniversary of Palden Sherab Padma Samye Ling retreat center in upstate New York!
–
Padma Samye Ling (PSL) Monastery and Retreat Center was established by the Venerable Khenpo Rinpoches in 1993. Located in Delaware County in upstate New York in the western foothills the Catskill Mountains, PSL has been open year round and seven days a week for thirty years!
–
Nestled within 500 acres of forests, meadows, and natural springs, at Padma Samye Ling we’ve enjoyed numerous Dzogchen retreats, philosophical shedras, and ritual trainings by the Venerable Khenpo Rinpoches. Together we’ve built stupas and temples, enjoyed picnics and birthdays, anniversaries and sweet memories, always dedicating the merit for upcoming future generations and all beings everywhere.
–
In honor of the 30 year Anniversary of Padma Samye Ling, Ven. Khenpo Tsewang Dongyal Rinpoche commissioned a very special, limited edition set of the Eight Great Stupas for people to enjoy in their own homes!
–
The Eight Stupas (chöten cha gyé) represent eight important events in the life of Buddha Shakyamuni. These same stupas encircle the main temple at Padma Samye Ling like a brilliant garland of wisdom mind.
–
Each of these eight stupas is metal and designed to house special relics that you can either put within the bhumpa vase chamber or inside of the stupa base.
–
They are a gorgeous addition to any shrine or sacred space of meditation.
–
In addition, each set of the Eight Great Stupas will include a precious bag of rice that Ven. Khenpo Tsewang Dongyal Rinpoche has specifically blessed to place within the stupas. 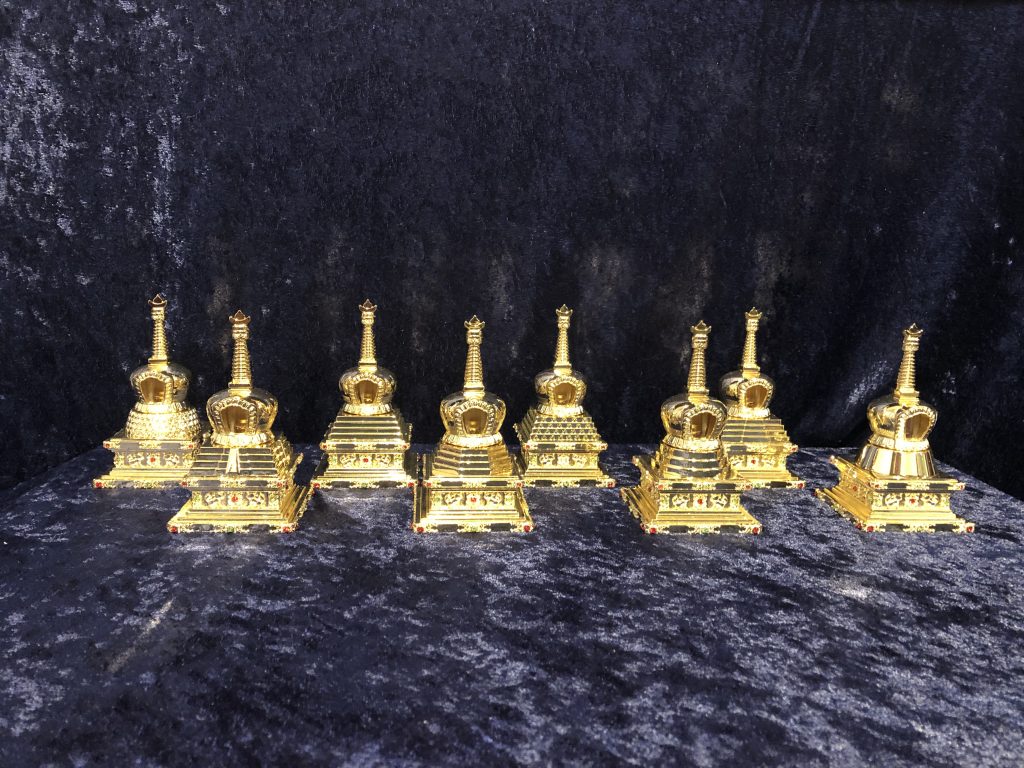 A reliquary stupa represents the dharmakaya mind of the Buddha. Symbolically the stupa embodies a complex range of iconographic meanings, with each of its components representing a specific aspect of the path to enlightenment. The base of the stupa is fashioned in the form of a many-stepped square throne or plinth, known as a “lion throne.” Above this ascend the stupa’s hemispherical dome; a square reliquary chamber, or harmika; an upper spire composed of up to 13 umbrella wheels, and a crowning finial of a lotus umbrella, crescent moon, sun disc and dissolving flame.

As is true for much of Buddhist art, the symbolism of this architectural image operates on several different levels simultaneously. A stupa incorporates five basic geometric shapes corresponding to the five elements – earth, water, fire, air, and space – out of which the world and all the atoms within it are composed. Furthermore, the overall shape of a stupa bears a close resemblance to the image of a seated Buddha. Merely by viewing such harmoniously balanced images we receive subtle benefit, experienced as a feeling of peace, well-being, and wholeness. Finally, it should be noted that the various levels of the stupa correspond to the various levels of the spiritual path culminating in full enlightenment.

THE SPECIFIC MEANING AND IMPORTANCE OF THE FORMATIONS OF A STUPA

All the round formations of stupas symbolize being free from complexities.

All the square shapes symbolize that realization and all its qualities are complete.

The gechu symbolizes the foundation of all merit.

The four levels symbolize (1) the four mindfulness concentrations, (2) the five things to be perfectly abandoned, (3) the four legs of miracles, and (4) the five powers.

The squares above the bhumpa symbolize (1) the eight noble paths, (2) the ten powers, (3) the ten abilities, (4) the eighteen unequalled qualities, and (5) the three equanimities of mindfulness.

All the rings and central column symbolize the thirteen dharmachakras.

The umbrella symbolizes always being protected by compassion. The sun and moon symbolize dispelling the darkness of all sentient beings. The top knot symbolizes that this is incomparable.

In the Noble Stainless Beams of Light Sutra states:

Noble sons and daughters! Whoever circumambulates or make offerings to a stupa will be blessed by Tathagatas, move to the supreme enlightened state through a non-returning path, and purify all of their karmic obscurations. Even if the shadow of a stupa touches birds, animals, deer, or whomever, they will not be reborn in the lower realms.

The Lotus Blossom Stupa symbolizes the birth of Siddhartha, the man who would later beknown as the Buddha. He was born in the Lumbini Garden at Kapilavastu in Northern India, in the sixth century BCE. The steps of the stupa are round and decorated with lotus petals.

After sitting in meditation for 49 days under a tree at Bodhgaya, Siddhartha attained enlightenment, and understood the true nature of all things. He realized that, like him, all beings without exception have the same potential for enlightenment, the “buddha-nature.” The steps of the stupa are rectangular and undecorated.

3. The Stupa of Turning the Wheel of Dharma (Wyl. cho ‘khor mchod rten)

This stupa represents the point at which the Buddha began to “turn the wheel of the Dharma,” to teach the path to enlightenment to others. Also known as the Stupa of Many Doorways, the steps are adorned with doorways symbolising the opening of the doors of the Dharma.

In the Deer Park at Sarnath, near Benares, the Buddha met up with the five ascetics who earlier had been his meditation companions on the banks of the Nairanjara River. They became his first disciples and received his first teachings.

This stupa commemorates the Buddha’s display of miracles at Shravasti, where he was challenged to demonstrate his realization. The Buddha responded by performing a different miracle every day for 15 days. Each of the four steps, in each of the four directions, have central extensions.

5. The Stupa of the Descent from Tushita Heaven (Wyl. lha bab mchod rten)

The Buddha’s mother, Mayadevi, was reborn in a celestial realm called the Tushita Heaven. To repay her kindness, the Buddha spent three months there and taught her the path to enlightenment.

This stupa represents the Buddha’s return from the celestial realms in order to continue teaching the people of northern India. Each side of the stupa has a stairway in the centre of the four steps.

This stupa symbolizes the Buddha’s reuniting of his monastic followers after they had become divided by disagreement. The steps are octagonal with eight corners and eight sides.

This stupa symbolizes the Buddha’s agreement to extend his life by three months, after one of his followers had pleaded with him not to pass away. The steps of the stupa are round.

This stupa marks the Buddha’s passing into nirvana, or mahaparinirvana, a state of true peace which is beyond death.

With his final words, the Buddha urged his followers to be diligent in their efforts to attain enlightenment. Lying on his right side and in a state of profound meditation, he left the world and passed into nirvana.