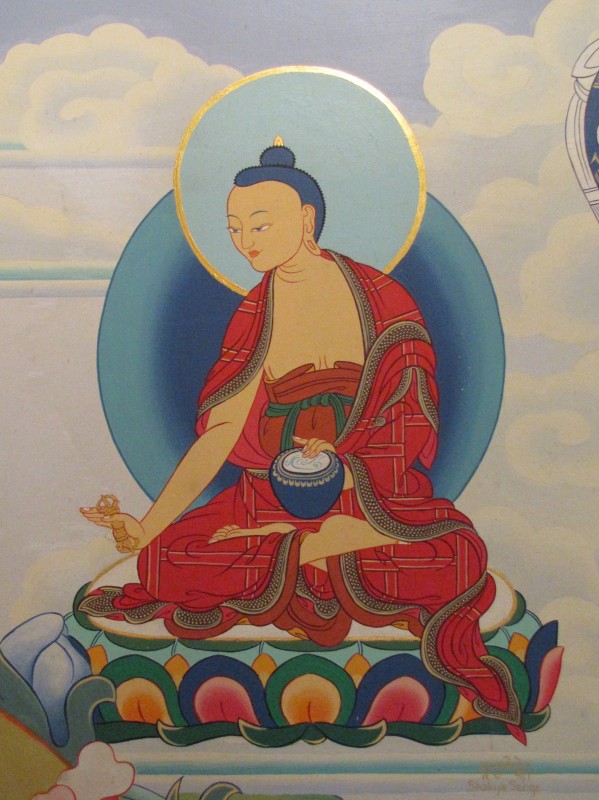 “The fifth emanation of Guru Rinpoche is Guru Shakya Senge, the form of Guru Rinpoche that demonstrates the ability to awaken within this lifetime through discipline and renunciation. This is a very simple and gentle approach, the gradual way of enlightenment. Shakya Senge wears monk’s robes and embodies the principle of realization through the monastic path. …

…In spite of his high realization, Guru Shakya Senge followed the simplest ways and skillfully made use of ordinary forms. He represents authentic spiritual development that always remains firmly rooted in the ground, rather than being passively absorbed in some high state. Even though Guru Shakya Senge was fully realized, he always appropriately used worldly conventions. To be perfectly aware of the law of karmic cause and effect, and to apply this knowledge in practice is the essential teaching of Guru Shakya Senge.

Guru Shakya Senge’s activities had a profound influence on King Ashoka, the most famous and powerful monarch in all of Indian history. Buddha Shakyamuni predicted Ashoka’s arrival in the following way:

One day the Buddha was going to the city to beg for lunch. On the way, he passed a beach where a group of children were playing. They were building intricate sand castles that even had rooms for the king’s court and treasure house. The children were playing the roles of king, queen, and ministers. As the Buddha and his students approached, the little boy who was acting as the king saw them coming and was very happy. He picked up a handful of the sand which symbolized the royal treasure and ran toward the Buddha. When Ananda saw that the child was going to put sand in the Buddha’s begging bowl, he was ready to stop the boy, but the Buddha said, “Let me accept his offering. This is special.” The Buddha lowered his bowl, but the child could not reach it, so the boy called for one of his little ministers. The boy asked his friend to get down on all fours and then stood on his back to put the offering in Buddha’s begging bowl.

Ananda and the Buddha’s other students saw all this and were very amazed. They asked, “Who is this child?” The Buddha replied, “This boy is uncommon. Through his aspirations and this connection with me here today, he will become a very great king about 250 years after my mahaparinirvana. He will help spread the Dharma and support the sangha. He will create as many monuments to Buddhism throughout the world as the grains of sand that he placed in my bowl. This is a very special child, and the friends who helped him today will continue to support his activities in the future.” Then the Buddha said a special dedication prayer and continued walking into the city.

As predicted, Ashoka appeared about 200 years after the Buddha’s mahaparinirvana. He was the son of a very famous monarch, but was not considered a prince because he wasn’t born in the palace. The king had been with another woman outside the palace, and Ashoka was her son. Everyone knew about this. Most of Ashoka’s half-brothers lived within the palace walls. When the king died, the brothers all began fighting one another for the throne. It seems the only thing that they all agreed on was that Ashoka should not be king. But Ashoka wanted to be king, and in any case, he had to defend himself against the anger and jealousy of his half-brothers. The situation culminated in a terrible fight that involved many of the sons, and finally Ashoka emerged victorious. He had killed all the others to become king.

Soon he moved the palace from its original site to Pataliputra. Today this place is known as Patna. Having re-established his capital at Pataliputra, Ashoka—who was a very powerful and vigorous fighter—started conquering other kingdoms and eventually became ruler of nearly all of central India. He was a very violent and cruel king. He pursued military conquest for years and killed many people. According to some accounts, he wouldn’t even eat lunch before he killed someone.

In those times there was a religious sect that worshipped a wrathful female goddess, and Ashoka was a follower of that tradition. His teacher told him that ifhesacrificed 10,000 human beings and offered them to the goddess, his power would increase. But since this was a religious ritual, he couldn’t do it in an ordinary, military way. So Ashoka had a ceremonial house built right at the central junction of Pataliputra. It had four doors—one in each of the four directions—and whoever was unfortunate enough to step inside would be executed according to the king’s orders.

As Buddha Shakyamuni previously mentioned, Ashoka had a good, strong foundation for the Dharma, but at this time his great motivations were obscured. In order to help dispel those obscurations, Guru Rinpoche appeared in the form of a simple monk and stepped inside the house of sacrifice. The executioner asked him to come forward and drew his sword. The monk asked, “Why are you going to kill me?” The executioner replied, “Because these are the king’s orders. It is part of a special ceremony.” So the monk said, “Let me stay here for one week and after that you can kill me.” The executioner agreed to this and the monk immediately started telling him about the six realms of existence, describing each one in detail. At the end, Guru Rinpoche pointed out that if he had already been killed, the executioner would never have heard this profound teaching. The monk meditated awhile and then gave more extensive teachings on the hell realms. He told the executioner about the karma of killing and hurting sentient beings, saying that this would lead to birth in various hell realms. He explained how certain negative thoughts and actions relate to specific forms of suffering.

As it happened, the executioner thought, “Until now I only knew one way of killing, but this monk has taught me many more. When the week is over, I’m going to boil him in a big pot and then roast him!” By the end of the week, the executioner had prepared everything just the way he wanted it, and he threw the monk alive into a huge cauldron of boiling soup. Afterwards he pulled the monk out and roasted him for a while, but in the midst of the fire he saw Guru Shakya Senge sitting cross-legged on a lotus. Thinking this was very extraordinary, he informed the king. Ashoka had to come see this for himself.

When King Ashoka entered the room, the executioner suddenly remembered his mandate to kill anyone who came through the door. The executioner drew his sword and the king, who never traveled without a weapon, drew his own sword and asked,“Why are you trying to kill me?”“Those were your orders,”the executioner replied. And the king said, “I don’t remember giving you any orders to kill me!” But the executioner reminded him, “You ordered me to kill the first 10,000 people who came into this room, and I still have a ways to go. Therefore I’m under orders to kill you.” Ashoka then answered, “Well, if that’s the case, you were in here first, so maybe I should kill you!” At that point, the monk effortlessly levitated up into the sky. After performing the four activities of sitting, standing, laying down, and walking in space, the monk began giving teachings. The executioner and King Ashoka were still having quite an argument while the monk was performing these miraculous activities in the sky above them.

Guru Shakya Senge began talking to them about how bad the karma is for taking the lives of other sentient beings. “These are terrible actions,” he said. “This is not the Dharma, which is a positive path. Stop all this violence. Since the king is unwilling to give his own life in this ceremony, how can he take the lives of others? You have been told about the evils of killing, so you should not take the lives of others anymore.” The monk warned, “By taking advantage of your power and using it for selfish ends, you will end up suffering far more than your victims.” When they heard this, both the king and executioner dropped their swords and became blissfully aware of Guru Shakya Senge, who continued giving teachings. Ashoka himself destroyed the sacrificial house and then took refuge in the Three Jewels.

Historical records say that after this episode, King Ashoka vowed that he would never again touch a sword with violent or negative thoughts. It is said that he became the most gentle and peaceful king of all time. Even without waging war, Ashoka’s loving-kindness and compassionate attitude ensured that his domain grew even larger and more prosperous, until his kingdom covered a large part of southern Asia. It spread from Afghanistan in the west, to Burma and Cambodia in the east, and south to Sri Lanka. Ashoka visited the pilgrimage places of the Buddha and erected many stone pillars with carved inscriptions,  pyramid-shaped monuments, and one million stupas containing the Buddha’s relics. In Nepal, there are four or five stupas near Kathmandu that were built by Ashoka, and there are many others all over India.

He had previously been known as Ashoka the Cruel, but after he became a follower of the Dharma, his name was changed to Dharmashoka. King Ashoka is one of the greatest examples of a religious monarch in the history of the world. In the form of a simple monk, Guru Padmasambhava helped bring Ashoka to the Dharma. That is the external meaning of the story concerning Guru Shakya Senge’s activities in Pataliputra.

Our precious bodhichitta is radiating all the time, guiding us through all our difficulties, even though we might hardly be aware of it. Love and compassion inspire us to communicate and make friends with one another. They are completely based on primordial wisdom and are inseparable from the nature of enlightened awareness. When we start to actively develop bodhichitta, negative emotions like anger, hatred, jealousy, and violent thoughts naturally dissolve and vanish, and our ego-clinging and obstructions immediately lessen until they’re completely gone. At the same time, we feel great joy, peace, and happiness, which we share with our friends and others and are appreciated by everyone. We should grow strong in the practice of friendliness and compassion toward all beings. The absolute way to understand Guru Shakya Senge is as nonattachment

and simplicity—finding contentment, joy, and happiness in following the middle path between asceticism and luxury. This principle is well represented by the serene mood and transcendent discipline expressed in paintings of Guru Shakya Senge.”