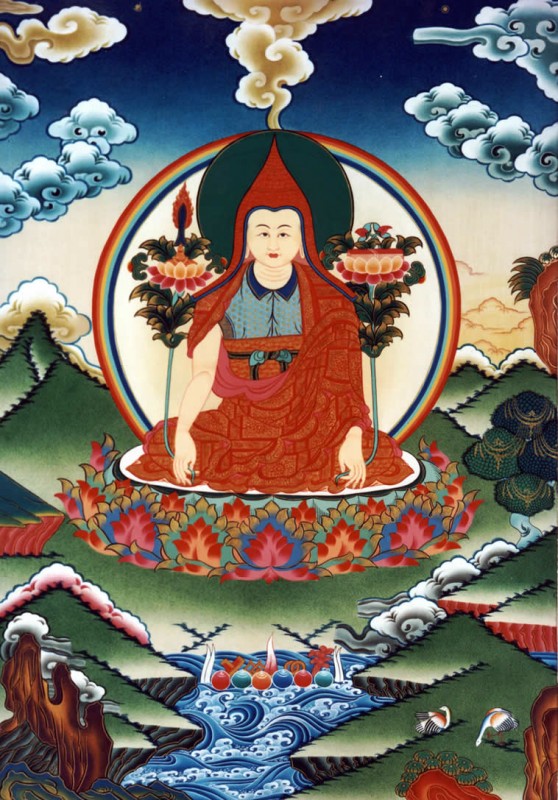 Longchenpa Drime Ozer (1308–1364) was born into a Nyingma practitioner’s family in Yoru in central Tibet. Guru Padmasambhava predicted that Longchenpa would be the lord of the Sutra, Tantra, and Dzogchen teachings. Even when he was very young his brilliance was notable. When Longchenpa was nineteen he joined Sangphu Neuthog, the most famous monastic college in Tibet at that time. His wisdom was incomparable, and he became its most famous student. His capabilities were so great that his classmates named him Samye Lungmingpa [bsam yas lung ming pa]: “He who remembers all the Buddha’s teachings.” Yet Longchenpa realized that his knowledge was mostly based on his intellectual mind. He decided it was time to develop knowledge based on practice.

At the age of twenty-seven he went to meet the great Dzogchen master Rigdzin Kumaradza. Kumaradza had experienced indications and signs that Longchenpa would become his most famous lineage holder, so he gave him every Dzogchen Nyingthig teaching. Longchenpa then meditated for three years in retreat at Samye Chimphu cave. During that time, his realization became equal to that of Guru Padmasambhava, Vimalamitra, and the wisdom dakini Yeshe Tsogyal. In other words, he reached enlightenment within those three years. Longchenpa became one of the most famous Dzogchen masters in history, and was known as the “Second Garab Dorje.”

For the benefit of future generations, he wrote famous Dzogchen texts, including the Seven Treasuries, the Trilogy of Comfort and Ease, and the Trilogy of Self-Liberation. Longchenpa combined the Dzogchen teachings of the Vima Nyingthig lineage from Vimalamitra with those of the Khandro Nyingthig from Guru Padmasambhava, preparing the ground for the fully unified system of teachings that four centuries later became known as the Longchen Nyingthig.

Longchenpa’s writings are especially beautiful and powerful. This is because they aren’t just scholarly teachings based on intellect—he wrote them from the vast realization of his wisdom mind.

Longchenpa [klong chen pa, c. 1308-1364]. “Longchenpa” can be literally translated as “Vast Expanse,” and Longchen Rabjam Drimé Özer’s name is often preceded by the honorific Tibetan title kunkhyen, meaning “omniscient.” A Dzogchen master of the fourteenth century, Longchenpa was admired by all schools of Tibetan Buddhism for the majestic scope of his Dzogchen and tantric writings, which reconciled and synthesized many prior traditions. He was an emanation of Princess Pema Sal, a direct student of Guru Padmasambhava and the youngest daughter of King Trisong Deutsen. Kunkhyen Longchenpa was predicted by Buddha Shākyamuni in various teachings such as the Dra Talgyur Tantra [sgra thal ’gyur rtsa ba’i rgyud], where he is referred to as Tsültrim Lodrö, his monastic ordination name. Between the ages of seven and ten, Longchenpa—then known by his birth name, Dorje Gyaltsen—learned a vast number of ritual ceremonies and mudras from his father, who was himself an accomplished yogi. He quickly became an expert, “receiving the empowerments, explanatory commentaries, pith instructions, and traditional practice methods for the Eight Commands cycle entitled The Gathering of Sugatas, and cycles focusing on Hayagriva, Vajrakila, and peaceful and wrathful forms of Guru Rinpoche.” At age ten he read the Prajñāpāramitā in Twenty Thousand Verses and the Prajñāpāramitā in Eight Thousand Verses, reciting each text aloud one hundred times. In this way, he completely mastered both the words and the underlying meaning of these profound teachings.

Longchenpa was ordained as a monk at the great Samye Monastery when he was twelve years old. There he studied the Vinaya, writing a commentary that gained him fame as an exceptional scholar by the time he turned fourteen. Later he studied the Lamdre practices of the Sakya, the Six Yogas of Naropa of the Kagyu, the Kalachakra Tantra, and many of the other tantras particularly related with the Sarma schools. He received the Shijé teachings of Padampa Sangye, the Chö teachings of Machik Labdrön, and various teachings from the lineage of Gotsangpa. Then, at nineteen, he went to Sangpu Neutok Monastery, which was perhaps the most important monastery in Tibet from around the eleventh to the fourteenth centuries. Distinguished masters of all the schools of Tibetan Buddhism were educated at Sangpu, and Longchenpa became the most renowned of them all. At Sangpu he studied countless classical texts, including the Five Treatises of Maitreya, the Compendium of Valid Cognition [Tib. tshad ma kun btus; Skt. Pramana-samuccaya], the Detailed Commentary on the Compendium of Valid Cognition [Tib. tshad ma rnam ’grel; Skt. Pramana-vartika-karika], and all the texts and commentaries related with valid cognition and the Prajñāpāramitā. He studied all the works of Nāgārjuna in detail, explanations of the class of profound sūtras, and many secular texts, including the Mirror of Poetics and its commentary. He additionally studied the Collected Tantras of the Nyingma School and many pith instructions; the cycles of teaching from the Kadampa school; the Vinaya, the Sūtras, the Abhidharma, and their commentaries; he studied various practices and commentaries on the Kalachakra Tantra with Karmapa Rangjung Dorje; the Six Yogas of Naropa; many works and teachings of Saraha; countless sadhanas and pith instructions; the process for refining mercury; the creation and meaning of astrological charts, and innumerable other teachings and practices. In short, Longchenpa gained “universal fame as a great scholar, undisputed and unparalleled, and was known as Samyé Lungmangpa,” which means “The One From Samyé Monastery Who Holds Many Scriptural Transmissions.” Longchenpa also memorized a vast quantity of the teachings and could quote them all at will. In brief, he “completed his study and training in the entire range of fields of inquiry.”

During this time, Longchenpa also engaged in the “phases of approach and accomplishment for deities associated with the development of sublime knowing, such as Achala, Sarasvati, and Vajravarahi, and was graced with visions of them.” It is said that he became completely inseparable from Sarasvati, who was always with him. Longchenpa left Sangpu due to the burning desire to really apply the teachings and the frustration he experienced at the hands of some wild Khampa monks, who had evicted him from his room on seven different occasions. After leaving, he engaged in meditation retreat for eight months in almost complete darkness, experiencing various signs and indications of accomplishment in dreams and so forth. Then, at twenty-seven, he set out to meet the great master Rigdzin Kumaradza, who would become his root teacher—a dākinī prophesied he would meet this great master in a dream he had during retreat. In the words of Nyoshul Khenchen Rinpoche,

As soon as he saw Kumaradza, Longchenpa knew with certainty that before him was Vimalamitra in person. The guru himself was extremely delighted and said, “Last night I dreamed of an amazing bird, which I was told was of divine origin, surrounded by a flock of a thousand smaller birds. They took my texts and flew away in all directions. When I saw you, I immediately knew that you would become a holder of my lineage of spiritual teachings.”

Longchenpa received many teachings, empowerments, transmissions, pith instructions, and sadhana cycles from Rigdzin Kumaradza. During this period he became quite close with the Third Karmapa Rangjung Dorje, who was also a student of the great Rigdzin. After some time, Longchenpa was able to practice with the guru for nearly two years at Shampo Glacier and other places, engaging in the Dzogchen teachings of the Vima Nyingtik in particular under very harsh conditions. When Kumaradza eventually empowered Longchenpa as his vajra regent, “the guardian deities of the teachings actually manifested,” especially Rahula. Longchenpa went on to practice at Gangri Tökar in solitary retreat for three years, as an offering of practice to his teacher. Throughout this retreat he had only several pounds of barley flour and about twenty-two mercury pills to sustain himself.

Once, while Longchenpa was giving an empowerment, Guru Padmasambhava himself bestowed the name “Drimé Özer” (“Stainless Ray of Light”) upon him, while Yeshe Tsogyal gave him the name “Dorje Ziji Tsal” (“Vajra of Dynamic Brilliance”). This great master had countless visions of deities, spirits, buddhas, maṇḍalas, and purelands, in dreams, pure visions, and terma revelations. He had visions of Kuntuzangpo, the maṇḍala of peaceful and wrathful deities, Vimalamitra, Rigdzin Kumaradza, and Orgyen Pema Gyalpo, among others, in a continuous experience of the third vision of Togal. “The true measure of this experience became obvious: his body could pass unimpeded through solid rock as though it were space, the slightest sound of his speech captivated the minds of discriminating individuals, and…his mind was imbued with the deep, indwelling confidence of realization.” The scope and breath of Longchenpa’s teachings and terma revelations are unfathomable, but particularly important were his activities related with the Pith Instruction Class [men ngag de] of Dzogchen. In the words of Khenpo Tsewang Dongyal Rinpoche,

The innermost teachings of Dzogchen are contained within the Pith Instruction Class and were principally taught by Guru Padmasambhava and Vimalamitra. They were passed on in an unbroken lineage through the long tradition of kama (oral instructions) and the short tradition of terma (revealed treasures). The great Longchenpa, who was renowned as a second Garab Dorje, merged these two transmission lineages along with his own terma into a single practice tradition called the Nyingtik Yabshi.

Longchenpa attained mahaparinirvāna “at the age of fifty-six, at midday on the eighteenth day of the month of Gyal in a Female Water Hare year,” 1364. He left his last testament, Stainless Light, for the benefit of his students. In part, it reads:

One more thing, my students: we are connected through the dharma and through samaya, thanks to our shared karma and pure aspirations over a very long time. Although we have met, we must separate; master and disciples must part company. Please understand that we are like travelers in a marketplace.

I give this advice from my heart entirely to benefit you. Homeland, wealth, dear friends, loving relations—let go of all distractions  and complications of this life, and please cultivate meditative stability in peaceful places.

When it is time for you to go, nothing will prevent it; you need the sacred dharma to meet death fearlessly. From now on, please exert yourselves in becoming familiar with the guru’s pith instructions, the teachings on what lies at the very heart of profound meaning.

Among all the teachings, those on the heart essence of utter lucidity—the secret meaning of the Nyingtik teachings—lie at the core of everything. They are the most sublime of all, the path to buddhahood in a single lifetime. Please endeavor to accomplish this wholly positive state of supreme bliss…

The joy I feel at dying is my finest accomplishment…. Now I, Pema Ledrel Tsal, will not linger, for I go to assume the throne of immortality and supreme bliss. This life, my karma, the momentum of my aspiration, my worldly concerns, the perceptions of this lifetime—all have come to an end. When the panoramic visions of pure realms arise in the bardo, I will be aware, instantly and spontaneously, that in essence these are awareness’s own manifestations and that I am therefore close to attaining the ongoing and authentic being of the primordial state….

But for now, our connection in this life has ended. Do not lament the passing of this wandering beggar who is happy with his lot. Instead, pray to him constantly. These are my words of advice, offered for your benefit, like a multitude of lotus flowers delighting the bees—you, my faithful ones. May the virtue of these well- chosen words ensure that those in the three realms pass into nirvana on the level of primordial being!

This concludes my testament, Stainless Light, advice from Drimé Özer.”

Previous Post
Celebrating the Life and Teachings of the Buddha in Nashville, Tennessee
Next Post
A Friend to Everyone