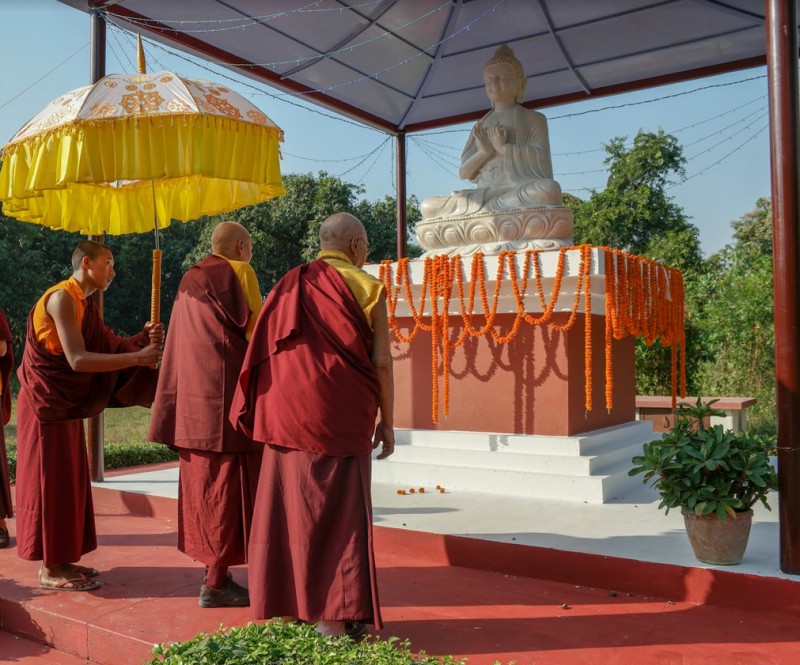 Buddha Shakyamuni was the fourth of one thousand buddhas that will manifest enlightenment during this “Fortunate Aeon” [bskal pa bzang po], or kalpa, which is called “Fortunate” because so many supreme nirmanakaya buddhas will appear and teach the Dharma to beings during this period. (1) Buddha Krakucchandra, (2) Buddha Kanakamuni, and (3) Buddha Kashyapa preceded the appearance of (4) Buddha Shakyamuni, whose Dharma teachings we now practice. The Venerable Rinpoches elaborate upon the meaning of an “aeon of light” in the “Splendid Presence of the Guhyagarbha:”
“The perfect time of a nirmanakaya buddha is an aeon of light. In general, aeons [bskal pa] can be classified in terms of two categories: (1) “aeon of light” [sgron me’i bskal pa], during which a buddha appears and teaches the Dharma; and (2) “aeon of darkness” [mun pa’i bskal pa], during which no buddhas appear and no Dharma is taught. So, the perfect time of a nirmanakaya buddha is when beings can benefit from the teachings. Once a buddha manifests during a given aeon, it is subsequently known as an “aeon of light.””
In any case, the Great Ascetic, Buddha Shakyamuni, is known by many names, several of which will be used throughout the present text. Some examples include Supreme Teacher [bla ma ston pa], Blessed One [bcom ldan ’das], Thus Gone One [de bzhin gshegs pa, Skt. Tathagata], Lion of the Shakyas [mi’i thub pa sha kya seng ge], Great Sage [drang srong chen po], Lord of the Sages [thub pa’i dbang po], Glorious Conqueror [dpal rgyal ba], and Awakened One [sangs rgyas]. All the Buddhadharma that now exists is derived from the boundless compassionate activity of this peerless guide, as the great Mipham Rinpoche indicates in his commentary to Khenchen Shantarakshita’s [mkhan chen zhi ba ’tsho] renowned Madhyamakalankara [dbu ma rgyan], or Ornament of the Middle Way:
[I]t is undoubtedly due to nothing other than the power of the generation of [enlightened] mind and the aspirations of this great Preceptor [Shantarakshita] that the teachings are present in Tibet. Yet, from their individual perspectives, people believe that this presence is because of their own particular gurus and monasteries. Similarly, everything down to [such things as] hair being shaved off and clothes being given the [monastic] colors is the kind activity of the Buddha, but nobody realizes this.”
Key to Opening the Wisdom Door of Anuyoga (pg 206)
Photo of HE Terton Namkha Drimed Rinpoche and Ven. Khenpo Tsewang Dongyal Rinpoche at PBC Orgyen Samye Chokhor Ling Nunnery on October 31, 2018, by Mark McDonnell.
Previous Post
The Three Essentials of Tibetan Buddhism: Renunciation, Bodhichitta, and Pure Perception
Next Post
Mandala