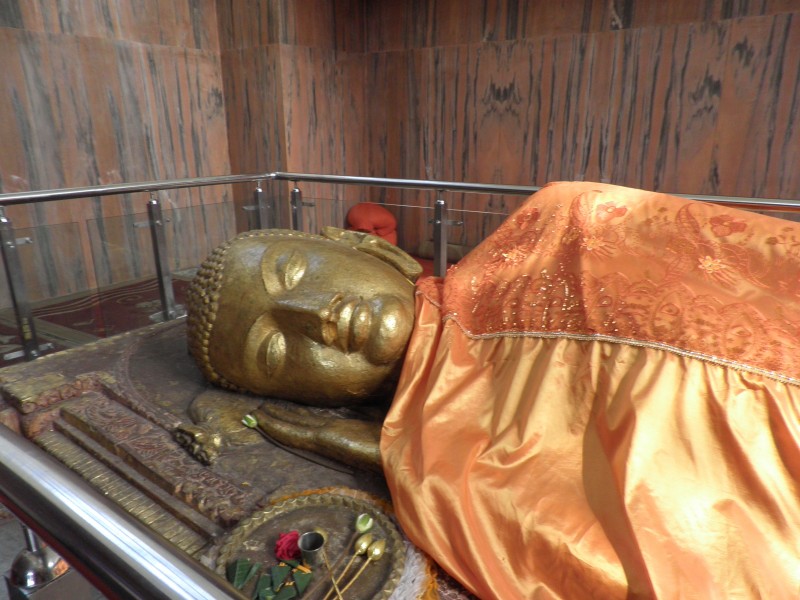 “During the last days of the Buddha’s life when he was laying down between the sala trees in Kushinagar, he announced to all his disciples that he was going to enter mahaparinirvana. He had given about 100,000 legacy teachings known in the Mahayana Sutras as the Mahaparinirvana Sutras. This teaching was almost complete when he said there was one last thing he needed to do with his actual body—he was going to bring a very famous musician of the gods named Trezar Rabgha to the Dharma.
So with his students gathered around, and without changing his position, the Buddha emanated into another being—not as the Buddha, but as a musician. The Buddha saw that he could benefit this famous musician only through music and not in any other way because the musician was very arrogant. Trezar Rabgha thought that he was the very best musician in the world and that no one could challenge him. He was so prideful and so involved in his music that he didn’t have time for anything else.
The Buddha emanated as a musician in front of Rabgha’s house. He held a very beautiful mandolin and began to play. Rabgha heard this from inside and thought, “Who could play in front of me like this? Who is that arrogant person?” At first he didn’t really pay attention, but as the Buddha continued, Rabgha began to listen and think that it was quite good. He came out and saw a man playing a beautiful mandolin. Rabgha immediately got angry and thought, “Who dares challenge me? I must crush his pride.” So he went inside and brought out his mandolin and began playing. They both played at a very expert level, but the Buddha gradually began playing in a more and more sophisticated way. He began to play the first, second, third, and fourth strings without touching them directly with his fingers and doubling the sound of his music. Rabgha thought he was a very expert musician, and said, “Who are you actually? Are you a god or a naga? What clan do you come from?” The Buddha said, “I’m not from a clan. I’m a simple monk known as the Buddha.” Then he revealed himself as the Buddha and immediately Rabgha’s pride completely dissolved. Rabgha touched his head to the Buddha’s feet, and the Buddha gave a teaching. At that moment, Rabgha achieved realization of the first bhumi.
This is an example of the Buddha’s beneficial activity and how it is unending and without any divisions. The Buddha helped Trezar Rabgha while he was still lying between two trees and teaching his students. The activity of enlightened beings is pervasive, continuous, and inconceivable.”