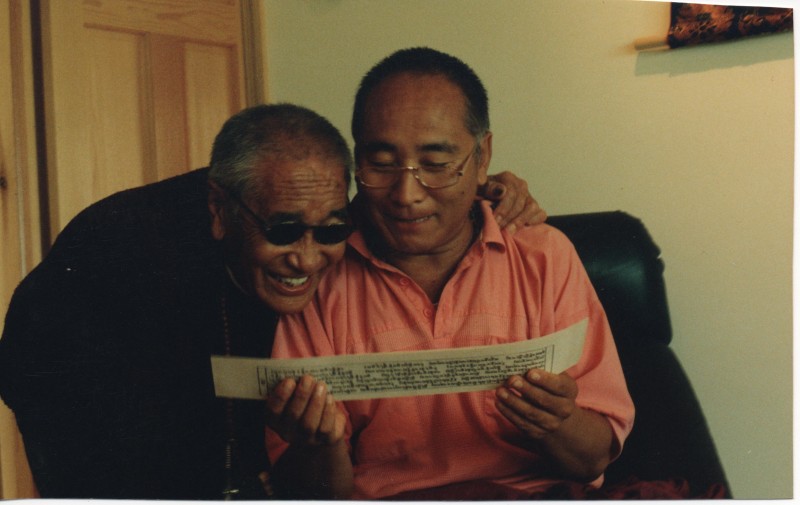 “It is very precious to receive and study the Buddha’s teachings. It’s like bringing light into darkness. If we don’t first study the teachings, it’s like trying to climb a mountain without any hands. We must study and contemplate, and then apply the teachings in meditation to go beyond mere intellectual understanding, and bring certainty wisdom of the teaching into our hearts. We must do all three of these things to bring about the desired result.
The three wisdoms of (1) listening, (2) contemplation, and (3) meditation are very important, particularly in these degenerate times. The great master Longchenpa said that in ancient times when the time was perfect, students would instantly achieve realization the moment they received teachings. Why did this happen? The teachers were highly enlightened beings, the students were full of devotion, enthusiasm, and joy, and without any doubt or hesitation, and the timing and circumstances were perfect. Yet according to the teachings of the Buddha, in these degenerate times, we generally don’t have as great of teachers and students as in ancient times. Everything is a little dim. Therefore we need these three wisdoms to usher our realization and understanding. We should not see them as insignificant—instead we should take them to heart and apply them in practice.”
Degenerate age (Tib. rtsod ldan; Skt. kaliyuga). The commonly heard expressions “degenerate age,”“age of dregs,” and “degenerate times” all technically refer to a kaliyuga, the last of four world cycles in traditional Hindu and Buddhist cosmology. In general, a degenerate age has five principal features: (1) beings are afflicted by war, famine, and illness; (2) the character of beings is declining and gross-level emotions and gross physicality are pervasive; (3) lifespan decreases dramatically in relation to other world cycles and will continue to decrease; (4) sentient beings continuously engage in the ten nonvirtuous actions; moreover, the extreme views of eternalism and nihilism are commonly accepted as correct; and (5) the obscurations of the five poisons—ignorance, attachment, anger, jealousy, and pride—are extremely powerful, such that worldly antidotes cannot easily reverse them.
Venerable Khenpo Rinpoches
Supreme Wisdom: Commentary on Yeshe Lama (pgs 393 and 502)
Photo of Ven. Khenpo Tsewang Dongyal Rinpoche with his father, hidden Dzogchen Yogi Lama Chimed Namgyal at Padma Samye Ling in the 1990s.
Previous Post
The Whole Point of Taking Buddhist Vows
Next Post
Watch: Final Concrete Pour of the Lotus Thrones for the Five New Stupas at Padma Samye Ling!