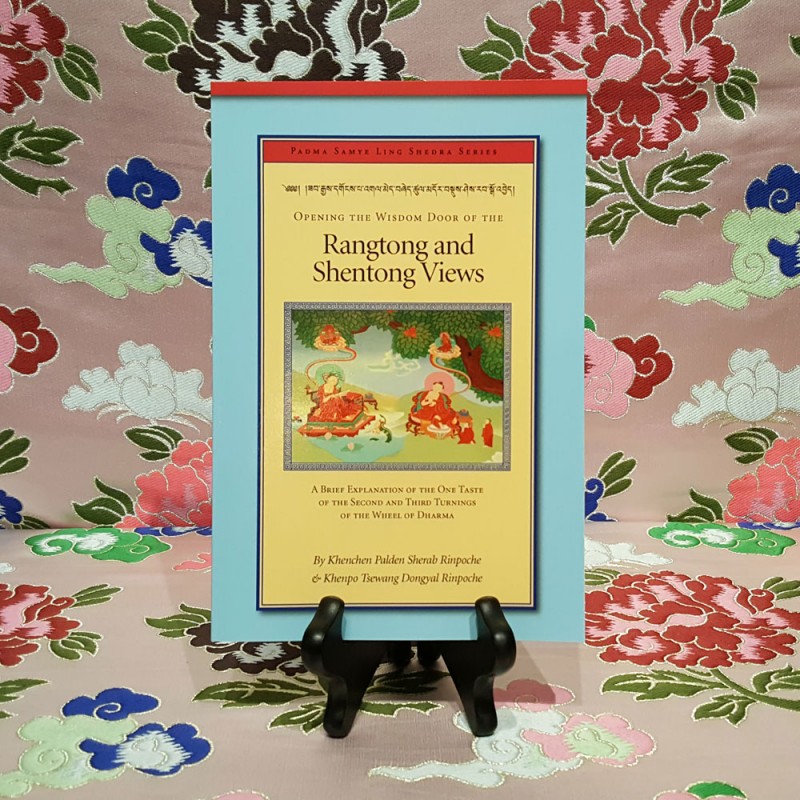 The Natural Union of Mind Only, Madhyamaka, and Shentong

The term ‘exaggeration’ or ‘labeling’ refer to all the names and titles we impute upon externally existent, mentally fabricated objects. Why do we refer to kuntag as exaggeration? Because if we were to look closely at the things we label, we would find that such things are not substantially existent. They have no independent, core existence. And who is it that perceives this exaggeration? It is none other than mind itself. None of the things we see or discuss exist outside of mind, since everything we experience is labeled and reflected within mind.

The ‘other power’ of mind, or zhen wang, creates this exaggeration. But whether we are talking about the exaggeration itself or the other power of dualistic mind, upon close examination we will find that neither is substantially existent. This lack of a core existence is not a newly-developed concept, but is actually inherent as our original nature. It is the way things originally are, the absolute nature, emptiness, or yongdrup. According to Prasangika Madhyamaka school, this other power of mind and exaggeration are relative truth, whereas the original nature is absolute truth. Thus, the Mind Only school is one of the great philosophical systems, very close in view to that of the Shentong School of Tibetan Buddhism.

Of the four principal Buddhist philosophical schools—Vaibhashika, Sautrantika, Mind Only, and Madhyamaka—Madhyamaka is usually considered to be foremost. However, renowned masters such as Chapa Chökyi Senge and Dolpopa Sherab Gyaltsen would reverse this ranking, placing Mind Only as the foremost and ranking Madhyamaka as the fourth and last school. These masters described the Mind Only school as the ‘Yogachara school of absolute Madhyamaka.’ Truly, Tibetan Buddhists consider Mind Only to be a very special school. As Mipham Rinpoche and Shantarakshita explained, just as a chariot needs two wheels to function properly, we cannot simply state which philosophical system is more important than the other. Both Madhyamaka and Mind-Only schools emphasize slightly different concepts in order to explain the nature of existence. Still, when it comes to applying the teachings in practice, both systems merge into one single state. So it is impossible to say which school is greater, and neither school contradicts the other. This is the principal Nyingma view, as taught by Mipham Rinpoche and other great lineage masters.”

“… We will now briefly explore how the different Madhyamaka schools describe buddha-nature. First, how does the Svatantrika Madhyamaka school [dbuma rang rgyud pa] of Tibetan Buddhism establish or introduce buddha-nature? Svatantrikas introduce buddha-nature to practitioners in a way they can easily understand. That is, they point out buddha-nature so that it can be understood by an individual’s conceptual, duality mind. According to this method, we first understand tathagatagarbha by thinking about the mind as a kind of negation state, free from all aspects of mundane existence. This is the ‘countable’ absolute truth we saw earlier. In a way, countable absolute truth is a type of negation more easily digestible to our present duality minds. Once we have a good foundation in the realization of countable absolute truth, the great Svatantrika masters lead us to an understanding of uncountable absolute truth, totally beyond all conceptual fabrications and duality.

In contrast, the Prasangika Madhyamaka school [dbu ma thal ‘gyur pa] immediately leads practitioners to an understanding of uncountable absolute truth. The Prasangikas immediately point out buddha-nature, free from duality, instantly ushering practitioners to this state. As we explained earlier, this uncountable absolute truth is the absolute nature beyond duality mind; it is the union of the two truths. It is important to understand that even though we call it ‘absolute truth,’ it actually encompasses relative truth as well, in a state totally beyond dualistic fabrications. Such is how the Prasangika Madhyamaka school begins to realize or perceive the innate nature of phenomena, the nature as it is. In this way the Prasangikas establish an unshakable certainty in the view.

According to the Prasangikas, once we have established certainty in the view as our foundation, we begin to develop strength in the recognition of the nature we have glimpsed. Viewing the nature one time is not enough; we have to develop strength in this view and make our recognition more stable so it will remain undisturbed by the habit patterns of duality. To accomplish this stability, the Madhyamaka schools teach us to accumulate the two merits of wisdom and merit. Again, these two merits are united, without separation or distinction. They cannot be isolated or removed from one another. Practiced as an inseparable union, the merits will restrengthen and develop the beautiful view we have discovered.

The accumulation merit includes engaging in good deeds of body, speech, and mind. On the other hand, wisdom merit includes relaxing and abiding in the absolute state, totally beyond duality. We should combine the practice of these two merits as much as our situation allows, continually maintaining joyful effort, mindfulness, courage, and commitment. By continually maintaining this practice, our realization will become very strong and our view will develop complete stability, at which point it will no longer be disturbed by duality. Then duality itself will vanish and dissolve into the absolute state of the true nature, and we will fully reveal the innate nature of the Buddha. This is the buddha-nature we have been discussing. An individual who has completely revealed the inner nature of buddha mind is known as a ‘fully-awakened one’ or an ‘enlightened being.’”

Our ordinary valid cognition is not due to errors in the objects of perception; rather, it results from our errors of knowledge as perceiving subjects. As we purify these errors, we begin to see things clearly and with pure perception. Normally, we see ourselves in our ordinary forms. After purifying our obscurations, however, we will see ourselves differently, recognizing the body as the mandala of the deities. Thus, pure valid cognition can also clearly, precisely, and comfortably recognize the Shentong view (of tathagatagarbha).

Even as the Nyingma school views the nature as ‘full’ of wisdom and beautiful qualities, it also perceives the nature of tathagatagarbha to be empty, as taught by the Buddha in his Prajnaparamita teachings. For this reason, Nyingmapas do not make big distinctions between the Rangtong and Shentong schools; since emptiness and clarity were equally taught by the Awakened One, both are recognized as definitive teachings. This was explained by Buddha Shakyamuni in the Heart Sutra, when he said, ‘Form is emptiness, emptiness is form.’ Buddha did not say that form contradicts emptiness or that emptiness contradicts form. Emptiness and form are inseparable. Although we cannot see emptiness directly, it is inseparable from form, or phenomena. If this were not the case, the world would not function at all. So the phenomenal world functions because it is open, free, and empty: Without emptiness and space the world would not work! This is why the Nyingma school does not see a contradiction between the Rangtong and Shentong positions, which emphasize emptiness and clarity, respectively.

The Prajnaparamita, or Perfection of Wisdom teachings are some of the Buddha’s most beautiful teachings. They explain that if one wants to clearly perceive form, one must clear the mind. If the mind is clear, form will be seen with clarity. Similarly, seeing form clearly indicates that the mind is free from obscurations. When the mind is purified, form will be purified; conversely, without purifying the mind, form will not appear with clarity. To give an example, someone with cataracts will not see the world accurately, because they will see different patterns and objects floating in space. Once again, this has nothing to do with errors of form (objects), but rather with the misperceptions of the perceiver (subject). When the cataracts are removed, form is perceived more clearly. In other words, we must clean and purify the mind, not external objects. Since obscurations can be purified, the situation is hopeful!

Venerable Khenpo Rinpoches
Opening the Wisdom Door of the Rangtong & Shentong Views: A Brief Explanation of the One Taste of the Second and Third Turnings of the Wheel of Dharma (pgs 32-34, 90-92, and 29-30)
www.padmasambhava.org/chiso/books-by-khenpo-rinpoches/rangtong-shentong-views-a-brief-explanation-of-the-one-taste