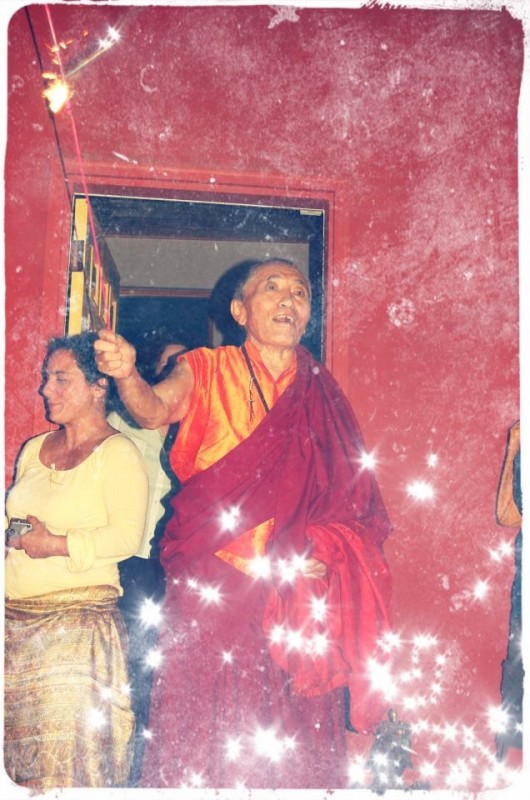 Ten Bhumis of the Bodhisattvas

Question: Ven. Khenpo Tsewang Rinpoche, can you please describe the ten bhumis of the bodhisattvas?
Answer: First, I will list the names of the ten bhumis.
1. Extremely Joyful (rabtu dga’ba)
2. Stainless (drima medpa)
3. Luminous (’odbyed)
4. Blazing Light (’od ’phroba)
5. Challenged to Purify (sbyang dka’ba)
6. Actualizing (mngondu byedpa)
7. Going Far (ringdu songba)
8. Unshakable (mig yo ba)
9. Perfect Intelligence (legspa’i blogros)
10. Dharma Cloud (choskyi sprinpa)
Master Chandrakirti and many other teachers connected these ten with a teaching given by the Buddha known as the Ten Bhumi Sutra (Skt. Dasabhumikasutra). In this text, the ten bhumis are linked to the paramitas. You are already familiar with the sixth paramita of wisdom, or prajnaparamita. This wisdom paramita can be further divided four ways to make a total of ten paramitas. The seventh is called the paramita of skillful means (thabs. Skt. upaya).The eighth is the paramita of power (stobs. Skt. bala). The ninth paramita is wishes, or aspirations (smon lam. Skt. pranidhana). The tenth is the paramita of primordial wisdom (yeshes. Skt. jnana).
The first bhumi, Extremely Joyful, intensifies the quality of the first paramita, generosity. This doesn’t mean that the other paramitas are not there. We previously discussed how they all come together in any individual action. During the onset of the first bhumi, transcendental generosity practices are especially wonderful, freely shining and vibrating with bodhichitta. On the second bhumi, Stainless, transcendental morality ripens. This is followed by transcendental patience on the third bhumi, and continues like that to the tenth bhumi, Dharma Cloud. At this level, primordial wisdom is radiant and brilliant. This is the relation of the ten paramitas to the ten bhumis.
“… When you enter the third path, which is the Path of Seeing. Seeing means you see directly what you’re meditating on. Until now, our meditation andunderstanding has been somewhat conceptual and theoretical. On the Path of Application, one has an increasingly clear intellectual understanding, but still relies on a conceptual element. On the Path of Seeing you now see things as they are, completely and directly. The Path of Seeing is also the first of the ten bhumi bodhisattva levels. On the first bhumi, you see the true nature exactly as it is.
This is followed by the fourth path, known as the Path of Meditation. Upon entering the Path of Meditation, you are on the second bhumi. The Path of Meditation is divided into nine levels, classified into three main groups of small, medium, and big, each of which is subdivided into small, medium, and big levels that represent the nine degrees of obscurations of knowledge that still remain. From the biggest of the big, to the smallest of the small, these also correspond to the remaining nine bhumis, from the second to the tenth. After the tenth bhumi, you enter the fifth Path of No More Learning. This is enlightenment, the culmination of the Five Paths and the realization of buddhahood.
Ven. Khenpo Tsewang Dongyal Rinpoche
Advice from a Spiritual Friend (pgs 225-226 and 173-174)
Photo of Ven. Khenchen Palden Sherab Rinpoche at Padma Samye Ling in 2009, by Derek Sarno.
Previous Post
Various Emanations
Next Post
Happy Dakini Day!