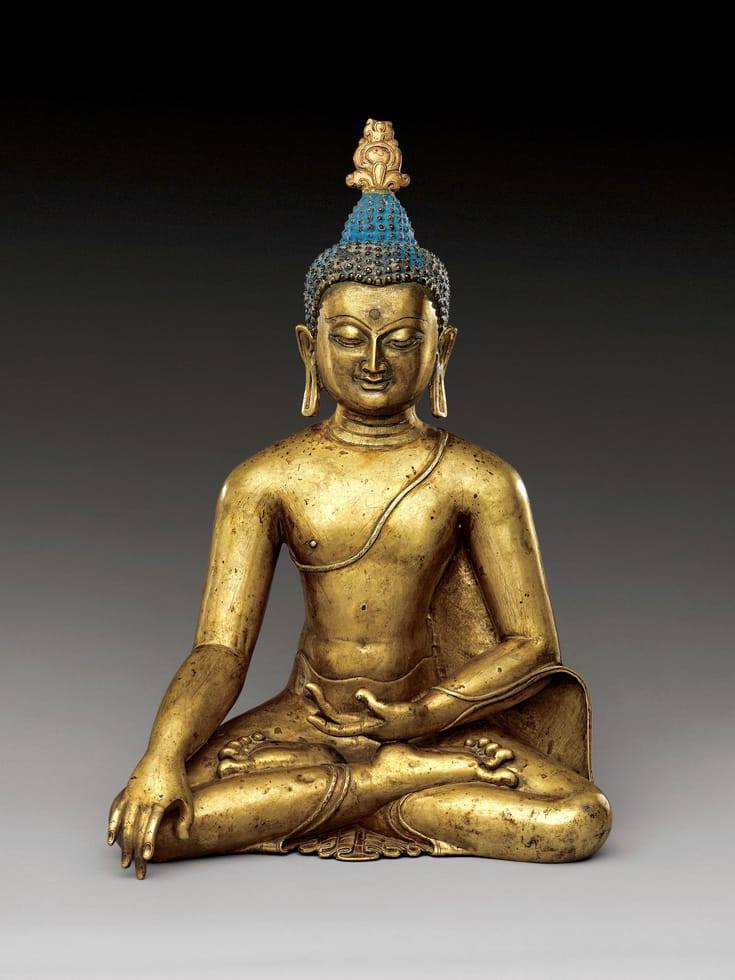 Who Is the Buddha?

“From time without beginning, sentient beings have wandered life after life in the vastness of illusion, which is known as samsara. Sometimes we experience the happiness and comfort we desire, sometimes the despair and hardship we hope to avoid. This is the landscape of the lives that we go through, each time adding more experiences and habitual patterns.

Yet in the depths of each individualʼs heart and mind, the spiritual qualities of love, compassion and the Dharma, which can be trusted without doubt or hesitation, are always available. Without fail for those who recognize it, this dharma proves itself a safe haven, an island in the buffeting ocean. Spirituality is the nature of mind, as natural as breathing is to life. It isnʼt fabricated by anyone. It is peace, love, compassion and wisdom, and hence a constant source of well-being. Like some naturally-occurring burst of adrenalin, it can be released at any time to re-energize our being. Like a rainbow in the sky, self-born, without doer or doing, it gives joy to all who catch sight of it.

Spirituality is a jewel residing as a perfect, hidden essence in all beings. Therefore, the spiritual, which we call the dharma, is the birthright of every being, an inheritance from which we can never be separated. Because it is not created, it can never be destroyed. When difficulties and hardships blow like a gale, dharma is the calm eye of the storm. Comfort and ease will be found there–on this we can rely. Since the beginningless beginning, no sooner had the human species emerged, than a range of body shapes and colors, situations, circumstances, languages, capabilities and levels of intelligence emerged as well. In accord with those variations, distinct teachers and teachings simultaneously arose to offer solace and guidance, just as they continue to arise today. Among those spiritual guides, a remarkable and extraordinarily gentle teacher was born two and a half millennia ago. He would become known as Buddha Shakyamuni.

According to his teachings, he was the fourth of one thousand buddhas that would come into this world. Each of them would re-ignite the inherent spiritual qualities of the sentient beings of their time period. Because they will continue to appear without interruption, giving an incredible variety of teachings but always acting with loving- kindness and compassion, this great cycle of time during which they appear will be known as the Fortunate Aeon.

The fourth of these gracious teachers was born in India, a land of many races and classes, into the caste of kings. He was born a prince named Siddhartha in the highly civilized and prosperous kingdom of Kapilavastu. His father was the powerful and renowned King Suddhodhana. His mother was Queen Mayadevi, celebrated for the gentleness and love she bestowed on everyone. From his youth, Siddhartha loved his retinue and all his subjects as if they were his relatives and closest friends. He was always thinking about how he could help them and tried his best to fulfill their wishes. Around the age of nine he began his formal education, which included the arts and sciences as well as rigorous physical training in the martial arts. Whatever he was taught, he understood and mastered immediately. His intelligence was so great that even among geniuses he would be regarded a genius. His reputation extended well beyond the boundaries of his kingdom.

Though he was so distinguished, he wanted to remove the suffering of others and to bring them happiness. He constantly questioned why is it that people suffer, grow old, get sick and die. Convinced that the natural condition of humanity would be happiness without strife, he wondered how the suffering he saw could be overcome. This concern was always in his thoughts and close to his heart. He asked every spiritual master he encountered what was the source of peace and what was the source of discord.

According to the wishes of his father, the king, he married the beautiful young princess Yashodhara. His wife was brilliant and accomplished in all the physical arts and scholastic studies, and they were surrounded by all the luxuries the world had to offer. But he never ceased to ask about the meaning of life and he spent more time thinking about the well-being of others than about his delightful circumstances. He was convinced that his mission was to bring happiness to all beings, not only to his subjects. He decided he could never accomplish this within the confines of the palace, and so at age twenty-nine he walked away from the kingdom and life-style which were his by birth.

He knew that the solution to the human predicament could never be found externally, but had to be discovered as the nature of oneʼs own mind. Nor could the nature of mind be accessed forcibly, but only by abiding at ease within that natural state. Therefore, he meditated for six years. At the age of thirty-five, he realized his inner nature of loving-kindness, compassion and wisdom, and all his previous questions were answered. From then on he was known as the Fully Awakened One, the gracious teacher Buddha Shakyamuni. Until his mahaparinirvana at the age of eighty-one, he continually shared his deep realization with everyone without exception.

His extraordinary teachings were:

1. All conditioned things are impermanent.

4. Nirvana or enlightenment is free from grasping and totally calm and peaceful.

5. Every living being has the same nature as an enlightened being.

6. No human is higher or lower than anyone else.

7. Mind is principal to matter

The Buddhaʼs main teachings were on nonviolence, love and compassion, and on how to bring out the good qualities within ourselves and others by exploring our nature and the nature of our environment. He taught about how to live in harmony and peace. In order to do this, one simple teaching is to have a good heart, which is also known as bodhichitta. Bodhichitta is love, kindness, compassion, and wisdom. These qualities are the basic nature of every living being. Practicing bodhichitta begins with having a good intention, the positive aspiration to help all beings. Looking at it this way, all teachings are really about having positive intentions and aspirations that start in the heart and the mind. When we have this foundation, all activities of body, speech and mind become healthy and serene. This is the way we should live and what we should share with others.”