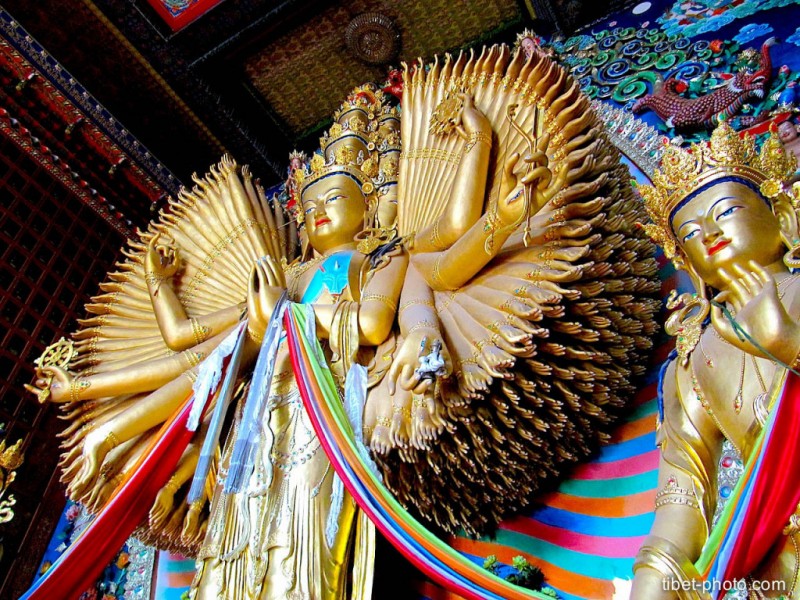 (3) Form is none other than emptiness.

(4) Emptiness is none other than form.”

(1) “Form is emptiness.” If we break a form down to the atomic level, we will lose the gross features of that form, and it will no longer be identifiable as the object we started with. And, as we saw in our discussion of the form aggregate, we can further subdivide these atoms into subatomic particles, or “partless atoms” as they are called in Buddhist philosophical terminology. When we do that, the form changes yet again.

Take this watch, for instance. All of us can see it. But if we break the watch into smaller parts, its identity as a solid, independently existing thing disappears. We cannot find a single “watch” among these various parts anymore. Thus it is with all phenomena. We see and feel that they exist until we begin to investigate and analyze them with our certainty wisdom [nges shes]. So, what is the nature of these phenomena? On the subatomic level, we see that all phenomena co-mingle inseparably with great emptiness. In other words, the ultimate, empty ground within which these countless “seeming-particles” arise is the basic reality of the phenomenal world.

It is not as though form and emptiness are two independently existing things, like “right” and “left.” Avalokiteshvara explains to Shāriputra that form is emptiness, rather than saying form is like emptiness, or form becomes emptiness, or used to be emptiness. He did this so students would avoid the mistaken views of eternalism and nihilism, which make form or emptiness into some kind of dualistic absolute. When we are liberated from clinging to forms, we will experience them as merely appearing instead of solidly existing. All appearances are empty from the beginning.

(2) “Emptiness is form.” Avalokiteshvara clarifies this idea with his second statement, the reverse of the first one. Emptiness cannot be separated from form any more than form can be separated from emptiness. Just as the nature of form is emptiness, the expression of emptiness is form. Emptiness is not a state of nothingness or a black hole, as put forth by the nihilistic view; rather, emptiness and form coexist in the same state. We could say that emptiness is the state of openness that allows things to manifest through dependent arising. Knowing this frees us from attachment to the relative appearances of the phenomenal world, including the non-existence of death and time.

(3) “Form is none other than emptiness.” At this point, you might be thinking there are two different things—form and emptiness—that exist in a unified state, both existence and nonexistence somehow forged together. Avalokiteshvara intends to free us from that notion in his third statement. Such a concept does not reflect the ultimate level of truth, because it represents some degree of clinging and fixation to the idea that there are two different, independent entities that have been joined together. The solidity of form and the “nothingness” of emptiness are only apparent, so it is incorrect to say that concrete existence and absolute nonexistence are in some way melded together. In the state free from all extreme concepts, emptiness and form have always existed inseparably, as one.

(4) “Emptiness is none other than form.” We have now seen that the very ideas of “existence” and “nonexistence” are faulty and extreme. Nevertheless, in his final statement, Avalokiteshvara wants us to know that we have still not transcended clinging, for the idea that existence and nonexistence do not exist is itself an extreme position. This axiom makes it impossible for us to hold on to any dualistic notions whatsoever. We are cut loose from the cycle of the subject-object duality to rest in the state of great equanimity, the state of simplicity, the great completion.

Buddhism explains that the true nature is utterly beyond words, beyond the narrow limits of our imagination. If this were not the case, we could simply define it with our ordinary mind by means of one of these four statements. Therefore, Avalokiteshvara expresses the ultimate nature of the form aggregate as something inexpressible.”