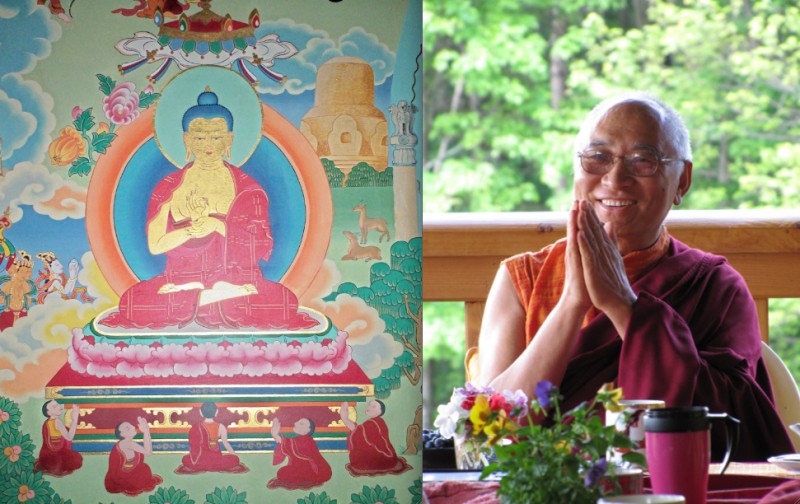 “Buddha Shakyamuni himself explained the difference between provisional and definitive teachings in the Mahayana sutra known as the Lodro Mizepe Sutra—or Inexhaustible Knowledge Sutra [blo gros mi zad pas (pa’i) zhus pa’i mdo]—named after the bodhisattva Lodro Mizepe who requested it. In this sutra the Buddha asks himself, ‘Which are definitive teachings and which are provisional teachings?’ He then answers: ‘Sutras that inspire individuals to the path are provisional, whereas sutras that explain the ultimate result, or fruit, are definitive.’ The Awakened One continues, saying, ‘Those sutras explaining individuals, feelings, life-force, and so forth should be understood to be provisional meaning teachings. Those sutras explaining unceasing emptiness beyond characteristics, expectations, and birth should be understood to be definitive teachings.’
These distinctions were summarized by the great master Nagarjuna in his Collection of Praises, in the section known as Praise to the Inconceivable Meaning. Nagarjuna said, ‘Teachings that explain emptiness are definitive and teachings that explain birth, death, and cessation are provisional.’ Likewise, the Omniscient Longchenpa summarized the difference between provisional and definitive teachings in the following way: ‘Whatever teachings describe the authentic nature of the ultimate truth are definitive meaning teachings. Whatever teachings inspire individuals to realize this nature are provisional teachings.’ Finally, Mipham Rinpoche concludes, ‘Teachings that appear to have contradictions and can be refuted by valid cognition are provisional.’
Many other masters describe provisional and definitive teachings according to the explanations of Maitreya and Asanga: In the Uttaratantra, these two great masters teach that whenever there are several different ways to interpret the teachings, they should be known as provisional. Actually, Buddha Shakyamuni actually predicted the coming of Asanga, who he said would make the decisive, clear distinction between provisional teachings and definitive teachings. So, in a way, Asanga was appointed to clarify which teachings are definitive and which are provisional.
… Mipham Rinpoche explained that teachings whose meaning and intention can be refuted by valid cognition are provisional. Accordingly, if a teaching contradicts valid cognition, its meaning is not ultimate. Buddha Shakyamuni himself said that we should analyze his teachings as though carefully examining gold to determine its quality. This is why we must study, contemplate, and meditate upon his teachings in order to discover their deep meaning. For this reason, he taught the ‘four reliances’ in the Sutra of Inexhaustible Knowledge, or Lodro Mizepe Shupai Do, named after the bodhisattva Lodro Mizepe who requested it.
The Tibetan world for ‘trust’ or ‘rely’ is tonpa [rton pa]. In these sutras, Buddha Shakyamuni explained, ‘We should rely on the teachings in four different ways.’ First, we should not trust or rely on individuals, but instead rely on the teachings. Second, we should not rely on the words of Dharma teachings, but instead rely on their meaning. Third, we should not rely on the provisional meaning of the teachings, but instead rely on the definitive meaning. The fourth reliance is based upon two types of definitive meaning: definitive meaning as it is understood by conceptual mind and definitive meaning as it is understood by wisdom mind. So, fourth, we should rely on the definitive meaning with wisdom mind rather than conceptual mind. These four reliances have been taught by many different Buddhist masters throughout history.”
Venerable Khenpo Rinpoches
Opening the Wisdom Door of the Rangtong & Shentong Views: A Brief Explanation of the One Taste of the Second and Third Turnings of the Wheel of Dharma (pgs 35-36 and 42-43)
Photo of Ven. Khenpo Tsewang Rinpoche at Padma Samye Ling in 2014.
Previous Post
The Goal
Next Post
Come to Padma Samye Ling for an Unforgettable Meditation Retreat!