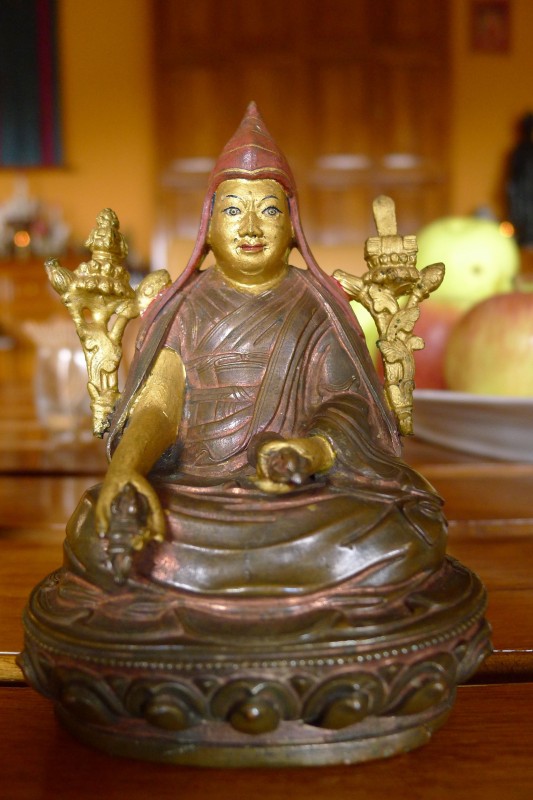 Jamyang Khyentse Wangpo [’jam dbyangs mkhyen brtse’i dbang po, 1820-1892]. Often referred to as the First Khyentse, Pema Ösal Do-ngak Lingpa, and Ösal Trulpe Dorje, Jamyang Khyentse Wangpo was an emanation of King Trisong Deutsen, Chetsun Senge Wangchuk, and Vimalamitra, among others, in addition to being a great tertön and scholar. He co-founded the Ri-me ecumenical movement along with the First Kongtrul, and was a great master of all the Buddhist schools of Tibet. Due to his tremendous realization, the First Khyentse was able to recover many lineages that had been lost over time, and was therefore the father of the nineteenth century Tibetan Renaissance, the lord of the “seven entrusted transmissions” [bka’ bab bdun ldan]. Altogether these include: (1) the oral tradition of kama [bka’ ma], the rare oral teachings from all schools of Tibetan Buddhism; (2) earth terma [sa gter]; (3) rediscovered terma [yang gter], which were previously discovered and revealed again; (4) mind terma [dgongs gter] that spontaneously appeared in the mindstream of Lord Khyentse; (5) recollected teachings [rjes dran], or teachings remembered from former lifetimes; (6) pure visions received from the Three Roots [dag snang]; and (7) the hearing or “whispered” lineage [snyan brgyud], pith instructions given by an enlightened being or qualified teacher.

As His Holiness Dudjom Rinpoche explains,

Khyentse Rinpoche had immeasurable faith and devotion towards each of these systems, of which the past traditions have been preserved in unbroken lineages. Therefore, scorning physical fatigue, and with fervent perseverance, he received in full, and without error, all their sequences of maturation and liberation from tutors connected with the sources of each tradition. By reflecting upon them he cleared his doubts; and while experientially cultivating them through meditation he received the blessings of the three secrets and the instructions of close lineages, both in reality and during various visions and dreams, from the learned and accomplished masters of India and Tibet, the peaceful and wrathful meditational deities and conquerors, and the host of ḍākinīs of the three abodes. In these and other ways he had limitless pure visions at each and every instant. Because he was a master of the seven types of entrusted transmission and a peerless tertön who saved many lineages from extinction, always practicing without even the slightest trace of sectarian bias, Jamyang Khyentse Wangpo is universally regarded and revered as an exceptional master and lineage holder of all the schools of Tibetan Buddhism.

During the present day there is no one, high or low, with whom he might be compared…because Khyentse Rinpoche had acquired firmness in the twofold precious enlightened attitude, and especially, because he was endowed with the vast power of pure vision and devotion toward all the philosophical systems, and was otherwise totally without bias and bigotry, his students were countless. They included all the well-known holders of the teaching, and great individuals among the Sakyapa, Kagyüpa, Nyingmapa, and Gelukpa, as well as spiritual benefactors, practitioners of retreat, poor mendicants, and adherents of the Yungdrung Pön tradition, without partiality…it was as if there was no one who did not obtain, in accord with his or her devotion, a connection [with the master], whether through the gift of the doctrine, the removal of misfortune, empowerment, or blessing. Free from the fetters of the eight worldly concerns, Khyentse Rinpoche eradicated the roots of such human behaviour as saving face and hope and fear, whether found in persons of high or low status. Thus, his career was that of a king among those who had renounced worldly activity and the cares of this life.

Excerpted from Ceaseless Echoes of the Great Silence: A Commentary on the Heart Sutra Prajnaparamita
www.padmasambhava.org/chiso/books-by-khenpo-rinpoches/ceaseless-echoes-of-the-great-silence