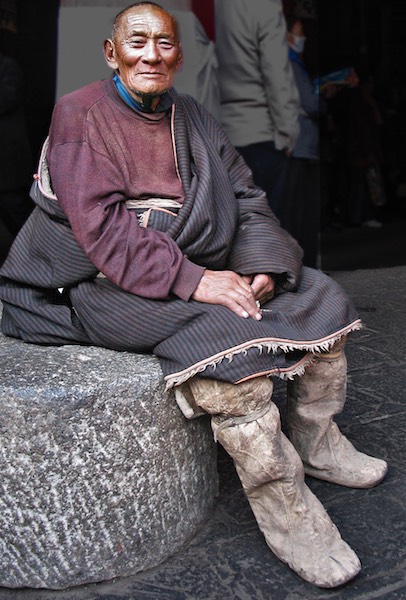 “There is a story from our own hometown where there was a very famous Dzogchen master who everybody said was the regent of Guru Padmasambhava. He was a very big ngakpa yogi with long hair whose name was Gechag Tsangyang Gyatso. He had so many students that he became one of the most famous teachers of the early twentieth or late nineteenth century. One of his students from our area was named Mondag, who received teachings from Gechag Tsangyang Gyatso and planned to do the practice. He asked all his friends and family members to let him go on retreat and help him take his belongings to a cave far off in the mountains.

Since he believed all phenomena are impermanent, he decided he wouldn’t need anything because these things wouldn’t support what he was doing. So he gave most everything away, and with the help of an assistant, he took just one bag of food and went off to the cave. They reached the cave and his assistant was about to go back home when Mondag gave him his boots, saying, “Please take these too, I don’t need them.” Now his helper argued with him, “Why you don’t keep your boots? Maybe you will need them.” He said, “No, I will not need them because I am not going out of this cave. You can have them.” So the assistant took the boots and Mondag stayed in the cave.

Mondag eventually finished all of his food and was getting very cold because winter was coming. It became so difficult for him that he decided he couldn’t stay there anymore, and one day he showed up in the village. All the villagers saw Mondag coming back without any shoes, but he did he have a sheepskin chuba that he had cut into two strips and wrapped around his feet. They laughed at him and asked why he returned. They joked, “Why did you return now? We thought you were going to go get enlightenment.” Mondag replied, “No, I didn’t get enlightenment, I just got hungry!”

He actually stayed in the cave for many months, but what he committed to in the beginning didn’t exactly match what he was able to fulfill in the end. He had to come back because he lost his commitment. In Tibet, this is sometimes called “bubble commitment”—at first it grows very fast, but then it bursts when the situation becomes too difficult. Therefore, all the teachings say that we should have courage and commitment, but we shouldn’t sacrifice everything in the beginning. In order to make that sacrifice in the end, we need to develop inspiration, courage, and commitment every day along the path, and eventually we will be able to fulfill the big goal.
We remember this yogi Mondag from when we were young and he was quite old. In the end, he was really a good practitioner. Khen Rinpoche says that Mondag was very good to him because he liked our father and grandfather.

The day Mondag died is another very beautiful story. Even though he didn’t exactly fulfill all the goals of his lifetime, he was still a great practitioner. He always meditated. He was a yogi and stayed in hermitage a long time. He really had no family members around because they had all separated and gone away. He just stayed near Gochen Monastery, and then one day he started the dying process. At that time, there was a man there who was from a village far away from our monastery. He was quite renowned as a village spokesman, and a bit of a showoff because he was always saying good things about himself. He was there with everyone else around Mondag’s bedside as he was dying and said, “Mondag, how good everything is that is happening to you now. What a beautiful day you are having! You are dying!” Everyone thought Mondag would get really angry, upset, and feel insulted. However, instead he said, “Yes, it is true. This glory is for me. This is the time that a yogi is releasing habitual grasping to the body. I feel great.” This is how a Dzogchen yogi should be.

Mondag really had a high level of accomplishment. Afterwards, the other man became really humble and devoted, and showed respect for Mondag with prostrations. He had insulted him, but Mondag answered him so beautifully, and then passed away. This is one of the stories of our village.”

Previous Post
Always Important Reminder
Next Post
Big view on why Vajrayana teachings are available now on this earth.