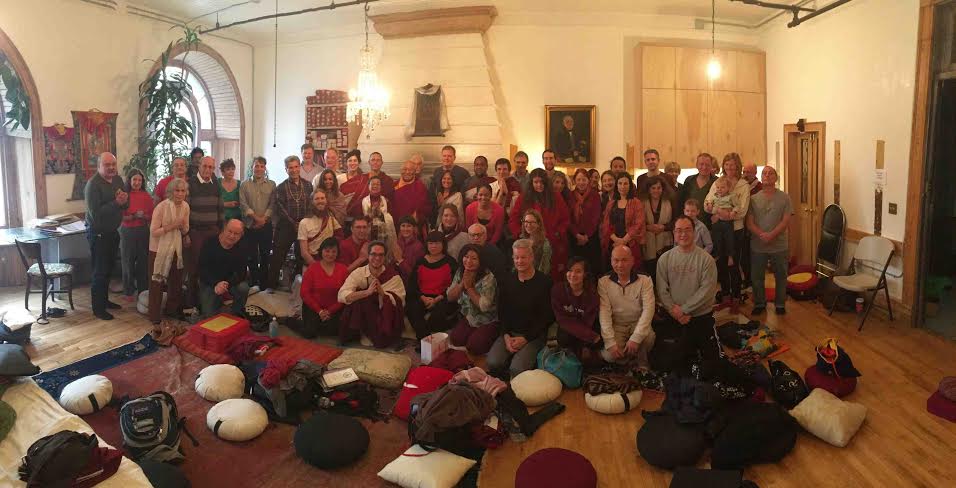 “(1) Perfect Teacher: The one thousand buddhas of the Fortunate Aeon are the perfect teachers, and Buddha Shākyamuni is the fourth among them. This aeon is called “Fortunate” because buddhas will manifest in it, a comparatively rare occurrence in the universe.

(2) Perfect Students: The retinue of students consists of two types: ordinary and extraordinary. Of the ordinary, four kinds were always present whenever Buddha Shākyamuni taught. These included men and women who had taken either monastic or lay vows—in other words, (1) monks, (2) nuns, (3) male lay practitioners, and (4) female lay practitioners. Altogether they are known as the “four common or ordinary gatherings” of Buddha Shākyamuni. Regarding the extraordinary students, these included great bodhisattvas, such as Chenrezig and Mañjushrī, as well as great arhats, such as Shāriputra and Maudgalyāyāna. Nonhuman beings— gods and other celestial beings, for example—were also in attendance. This entire gathering is referred to as the “perfect students.”

(3) Perfect Teaching: The Prajñāpāramitā belongs to the second turning of the wheel of Dharma by Buddha Shākyamuni. In it he revealed the true nature of all phenomena in samsāra and nirvāna.

(4) Perfect Time: According to Buddhist cosmology, our universe was created by the fleeting and fortuitous combination of otherwise disparate elements. This universe is said to be made up of twenty aeons, during which time it will experience eighteen cycles of rising to a “golden age” and falling to a “degenerate age.” We are currently living in a degenerate age of the Fortunate Aeon, a time when spiritual energy is actually at a peak, although the name “degenerate” doesn’t seem to indicate this. Buddha Shākyamuni appeared at the beginning of the present degenerate age. In any case, for those individuals who wish to practice and understand the meaning of Prajñāpāramitā, now is the perfect time.

(5) Perfect Place: Lord Buddha turned the wheel of the Mahāyāna on Vulture Peak Mountain, which Buddhism considers to be the geographic center of the world. This mountain is not so far from the spot where the perfect place allows realization to grow. These are the five perfections.”